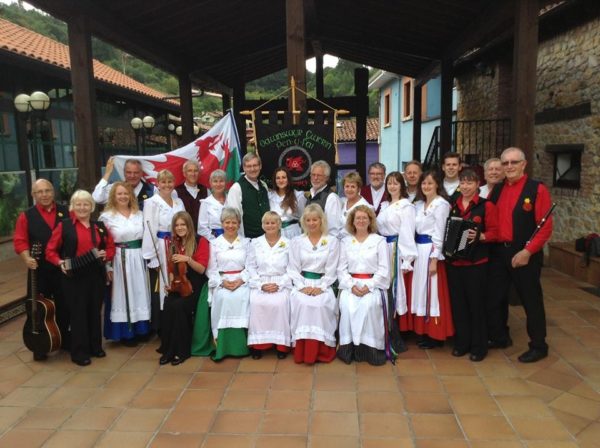 Biography:  One of the best known and respected folk dance groups in Wales. The team has been in existence for over 40 years and is still going from strength to strength. They are regularly invited to dance at venues throughout Wales, Great Britain and abroad, thus giving them the opportunity to display their extensive repertoire of Welsh folk dances and clogging routines. The team has travelled extensively, dancing in folk and dance festivals in France, Spain, Germany, Belgium and beyond. They perform in the traditional Welsh costume including the tall hats. The team also has a talented and dedicated group of folk musicians as part of the ensemble, performers of Welsh folk songs,and a group of able Welsh clog dancers.

The team’s leader since its inception is Mel Evans, from Bridgend, South Wales. He is a most experience dance leader and National folk dance adjudicator. He and his wife Gwynfydd originally danced as students at Swansea University, and enthusiastically set up the team in Penyfai (a small village near Bridgend, South Wales) in 1971. He still dances with alacrity and precision as do his children and grandchildren, some of whom are also team members.