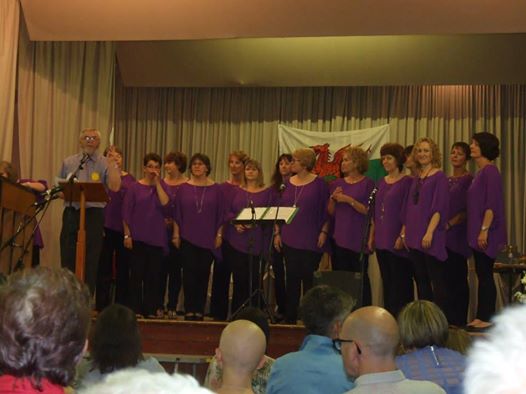 Biography: Lleisiau Clywedog Ladies Choir was formed in 1996 and most of the founding members still sing with the choir today.  We enjoy learning a wide repertoire of songs and hope that this enjoyment is passed on during our concerts. We have a strong link with Ysgol Plas Coch, Wrexham, where we meet to rehearse.

The choir takes part in a number of concerts each year supporting local and national charities, particularly Clwyd Motor Neurone Association, Family Friends, and Nightingale House and Hope House Hospices. We have competed in the National Gwyl Gerdd Dant on a number of occasions, taking the second prize for the second time in 2014. We also compete in local and national eisteddfodau, taking third place in the Folk Choir competition at the Royal National Eisteddfod held in 2007 and second place in 2011 when the Eisteddfod was held in Wrexham.  More recently, we have been involved in joint projects with Cantorion Rhos and the North East Wales Symphonia.

We are pleased to have been able to provide opportunities for young musicians both to accompany and perform with the choir during rehearsals and at concerts over the years, some of whom have gone on to make music their career.  Lleisiau Clywedog is led by Sheila Birkhead, originally from Old Colwyn.  Our accompanist is Caroline Morris BMusHons(RCM), who is also the choral accompanist for Cantorion Rhos.  She is an accomplished musician who plays both wind and keyboard instruments.