The 1947 International Eisteddfod was an unqualified success: groups from 7 foreign countries braved the journey to Llangollen, joining choirs from England, Scotland and Wales: in total 33 choirs performed (27 Adult and 6 Children). It was all great fun. Plaudits rang down on the organisers, the founders, and the competitors.

The next few years saw many more countries participating: by 1953, when Queen Elizabeth II visited the Eisteddfod as part of her post-coronation tour of Wales, singers and dancers of 30 nationalities had competed in Llangollen. A truly international festival had been created, organised and run by volunteers.

Llangollen’s place in world music is now immutable. More than 400,000 competitors from over 140 nationalities and cultures have performed enthusiastically on the Llangollen stage.

In 1955 a young Luciano Pavarotti sang in the choir from his home town of Modena, conducted by his father. The choir won first prize in the Male voice choir competition. Pavarotti returned for a spectacular concert in 1995.

It began with a vision that the ancient Welsh eisteddfod tradition could provide a means of healing the wounds of the Second World War, and help to  promote lasting peace.

The Snowflakes were just one of several Welsh choirs at the first Llangollen Eisteddfod and others included Penarth Ladies Choral Society and the Mid Rhondda Ladies Musical Society who competed against choirs from across the UK, Portugal, Italy, Sweden, Denmark, the Netherlands and Hungary 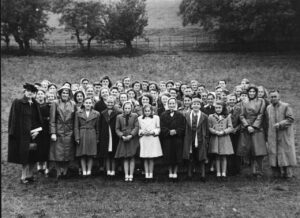 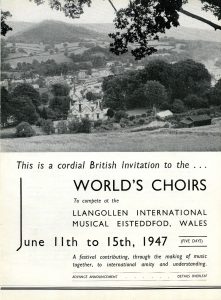 Placido Domingo confesses that his first professional engagement in the United Kingdom was at the 1968 International Eisteddfod.