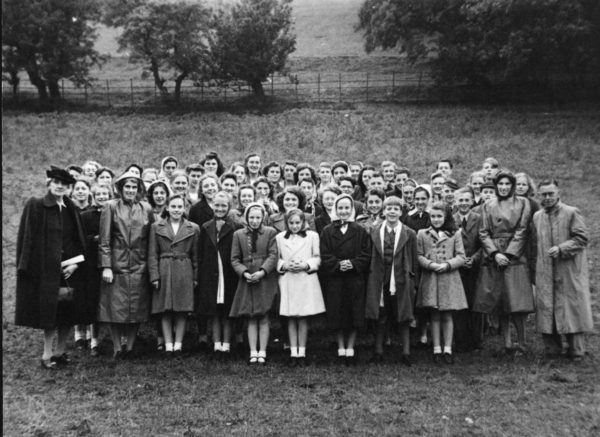 A member of a Cardiff children’s choir that won at the first ever Llangollen International Musical Eisteddfod has been an enthusiastic visitor to the 70th festival.

Grandmother Janette Snaith now lives in Colchester with her husband, Bryan, a retired clergyman, but back in 1947 the 14-year-old from Victoria Park, Cardiff, was a member of the famous Snowflakes choir.

The Cardiff schoolgirls took the inaugural festival by storm, being crowned the champion children’s choir and going on to make records and tour extensively.

Janette, a sprightly 83-year-old grandmother, made the trip to Llangollen as a special guest of the Eisteddfod and enjoyed a day listening to today’s competitors.

She said: “It’s been lovely and I’ve really enjoyed it. The flowers are fantastic, much more of them than in 1947.

“Then we all wore white right down to our ankle socks and we’d never met anyone from Europe before because of the war.

“It was quite a shock because everyone was dancing and singing.

“It was very strict for us though. We slept in a factory on bunk beds and we had to practice scales before breakfast and then went to a chapel and rehearsed and rehearsed.”

All that practice paid off though as they won and went on to sing all over the UK and in Europe, including at the Albert Hall and at the opening of the Festival Hall in London.

The Snowflakes were formed in 1926 by Gwenllian Williams and later continued under her daughters Eira Novello and Marion Williams.

They went back to the Eisteddfod in 1949 and won again and went on to make three records with the Decca label.

They were a very famous choir of the time and one former Snowflake went to Hollywood.

Ira Stevens left her home in Dogo Street, Cardiff, in 1936 for Los Angeles as the body-double for Shirley Temple, appearing in several films before returning to Wales in 1939.

“I still enjoy music,” said Janette who lives with one of her two sons, and she added: “The house is still full of music but I’m afraid my voice has gone now.”

The festival’s Musical Director, Eilir Owen Griffiths, who lives in Cardiff, said: “It’s fantastic that Janette has been able to travel up from Colchester with her husband and enjoy a day here with us.

“We’d be delighted to welcome any other members of the Snowflakes up here again especially for next year’s 70th anniversary festival.”

The Snowflakes were just one of several Welsh choirs at the first Llangollen Eisteddfod and others included Penarth Ladies Choral Society and the Mid Rhondda Ladies Musical Society who competed against choirs from across the UK, Belgium, Portugal, Italy, Spain, Sweden, Switzerland, Denmark, the Netherlands and Hungary

This Saturday is dedicated to the top choirs and concludes with the Choir of the World competition for the Pavarotti Trophy while Sunday sees the Eisteddfod let its hair down for Llanfest before the climactic final concert with Jools olland and his Rhythm and Blues Orchestra.

For more on Llangollen International Musical Eisteddfod and its competitions and concerts as well as how to get to it and where to stay go to https://international-eisteddfod.co.uk/ or check out https://www.facebook.com/llangollen