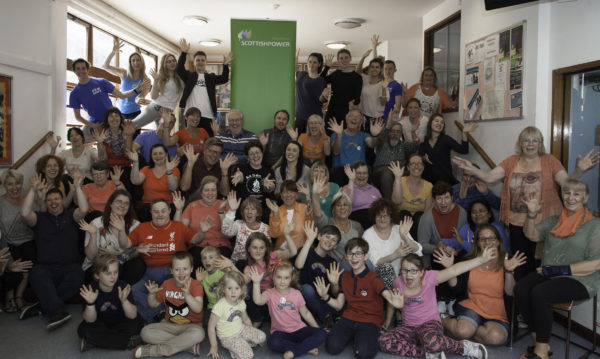 A super-choir of over 100 children and adults that celebrates diversity will send out a clarion call for world peace when they perform at an iconic festival.

Thanks to an £8,000 boost from power company ScottishPower’s charitable foundation, the group of choirs and dance groups from across North East Wales will showcase their talents at the Llangollen International Musical Eisteddfod.

The group, which takes the proud title As One, will present the world premiere of a song called One Family, specially written for the occasion by a local composer and lyricist, which proclaims the message that peace can be promoted through the diversity of music and dance.

After working hard to perfect their separate performances at a series of workshops held over the past four months members of the five groups involved in the Eisteddfod’s 2016 Inclusion Project came together for their final rehearsal at Ysgol Dinas Bran in Llangollen ready for their two appearances on the second day of the festival.

These will be at 10am on the Royal Mail Stage and at 1pm in The Pavilion on Thursday July 7.

The project’s artistic co-ordinator, Lesley Churchill Ward, was delighted with the way the rehearsal went and proud of everyone involved.

Lesley, who has worked with a host of performing arts groups as a musical director and theatre arts teacher since leaving the Ohio University School of Theatre, said: “As One certainly demonstrates great diversity.

“It includes the two dance groups New Dance from Wrexham and the one based at Ysgol Maeshyfryd in Flint along with choirs All Aloud from Coedpoeth, Tuned Together from a mental health care home near Denbigh and another called KIM – it stands for Knowledge, Inspiration, Motivation – formed by the KIM-Inspire mental health charity based in Holywell. 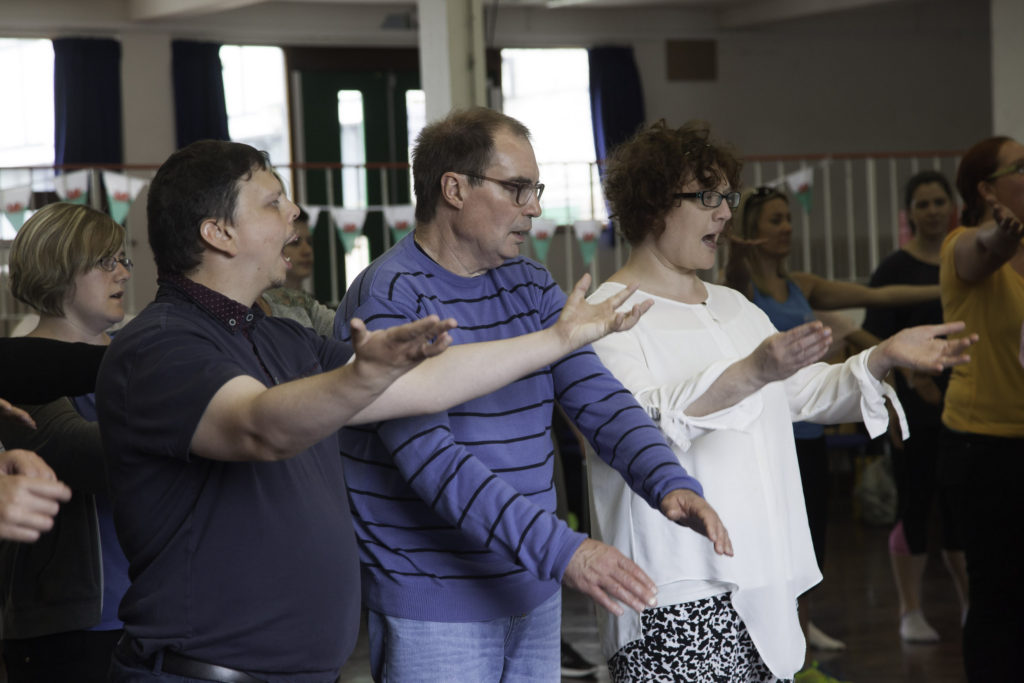 “Performers range from children as young as three to people in their eighties.

“Some of them are adults with autism, learning difficulties, complex personality disorders and blindness. But they have all come together wonderfully to harmonise the song One Family, a title which perfectly sums up the nature of this project.

“They’ve each been working independently and this was the first time they had performed as a single group. The dancers also sing and the singers move to choreographed movements.”

She added: “I’m incredibly proud of what they’ve achieved. It’s been a lot of work but it’s also been very happy work with plenty of laughs along the way.

“We’ve hosted previous inclusion projects at the Eisteddfod but this is the first time we’ve done something on such a grand scale.

“To me, this just proves that every single person on this planet has talent and, in the present political climate, bringing people together to spread the message of peace through music and dance couldn’t be more relevant and vital.”

ScottishPower’s Community Liaison Manager Roy Jones, who was at the rehearsal, said: “The ScottishPower Foundation was set up three years ago to support charities across the UK.

“Their applications for funding are appraised by independent trustees and for 2016 there were 23 schemes approved which included the Eisteddfod’s Inclusion Project.

“This is all about promoting art and culture and involving a whole spectrum of people, some of whom have disabilities.

“It’s a very exciting and worthwhile project and the Foundation is delighted to be supporting it.”

Ann Loughrey, Trustee and Executive Officer for the ScottishPower Foundation, said: “We are committed to supporting the arts and culture and on the 70th anniversary of Llangollen International Musical Eisteddfod we are delighted to fund the As One project that has brought together a group who have a diverse range of abilities who will perform a specially commissioned piece of music and dance on the main stages of the festival.” 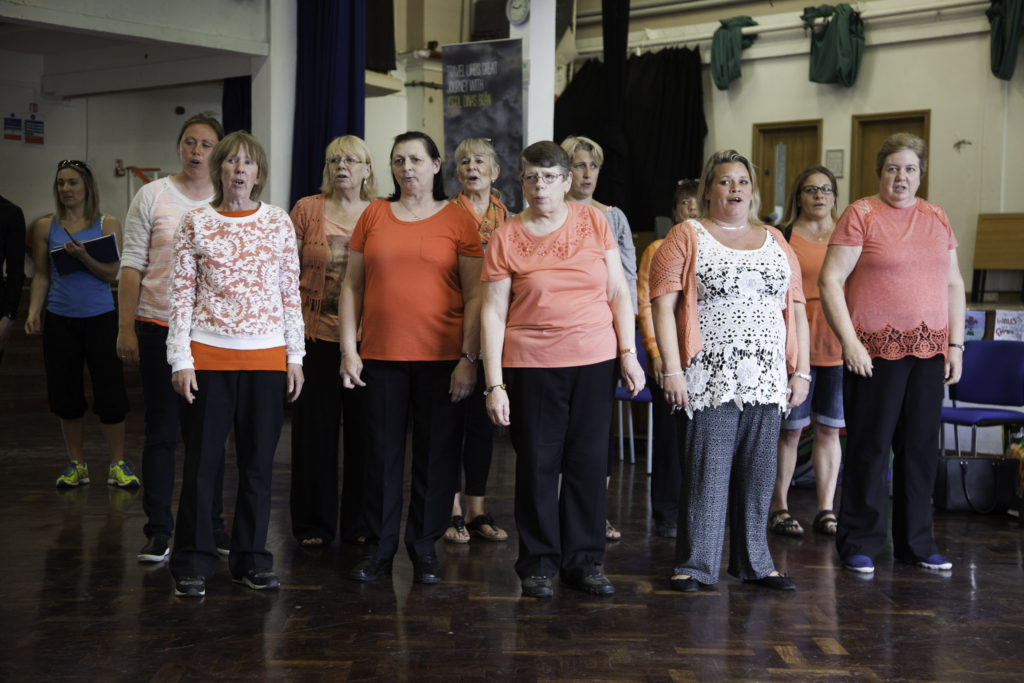 The new piece to be performed at the Eisteddfod has music penned by young composer Owain Llwyd from Glyndyfrdwy who is a former pupil at Ysgol Dinas Bran.

He said: “The aim was for the song One Family to reflect the ethos of the Inclusion Project and also what the International Eisteddfod represents in terms of promoting peace and understanding through music.

“Both the lyricist and myself worked closely with the group, attending the workshops they had to get their own thoughts on what the piece should be about, so lots of their dramatic ideas have been incorporated in it.

“The song is about 10 minutes long and also includes dance elements, which makes it very exciting.

“It was incredible to see all five groups performing it together for the first time in the hall of my old school in Llangollen.”

Wrexham-based writer Aled Lewis Evans, who added the words to Owain’s musical score, said: “I attended quite a few of the workshop sessions and get some idea of what the performers would like to see conveyed in the lyrics, phrases such as `onwards and upwards’ and about the state of the world today. I also got the idea rom them that it should be about family unity.”

Amongst those who will perform One Family at the Eisteddfod is 67-year-old Dorothy McKeand from Mancot in Flintshire who has been a member of the KIM Choir from Holywell for the past year.

“I’ve been involved with this project for about three months and after all the workshops we took part in it’s great to see everyone finally come together as one group for today’s rehearsal,” she said.

“The whole thing has been hard work but we’ve also had a lot of fun.

“Many people say they can’t sing but what we’ve heard today is proof that they can, and it’s all thanks to the fantastic support we’ve had from the ScottishPower Foundation.”

A performer from the opposite end of the age spectrum is 11-year-old Ben Edwards from Treuddyn, near Mold, in Flintshire.

He said: “I’ve been a member of the All Aloud choir for four years and working on this project to come up with a completely new song has been good.

“Seeing everyone come together at this rehearsal has been fantastic and I’ve really enjoyed myself.

“I’m really looking to performing the song in front of an audience at the Eisteddfod.”

Eilir Owen Griffiths, Musical Director of Llangollen International Musical Eisteddfod, said: “The Inclusion Project is something which I regard as very important to the festival and is the largest of its type we’ve ever been involved in.

“Llangollen is very much about diversity and we are delighted that this project provides a stage for all voices.

“It just wouldn’t have been possible without the fantastic support we’ve received from the ScottishPower Foundation and the tremendous work done by our artistic co-ordinator Leslie Churchill Ward.

“This project is definitely something everyone involved with can feel very proud of and I hope the Eisteddfod will continue to provide a stage for it for years to come.”