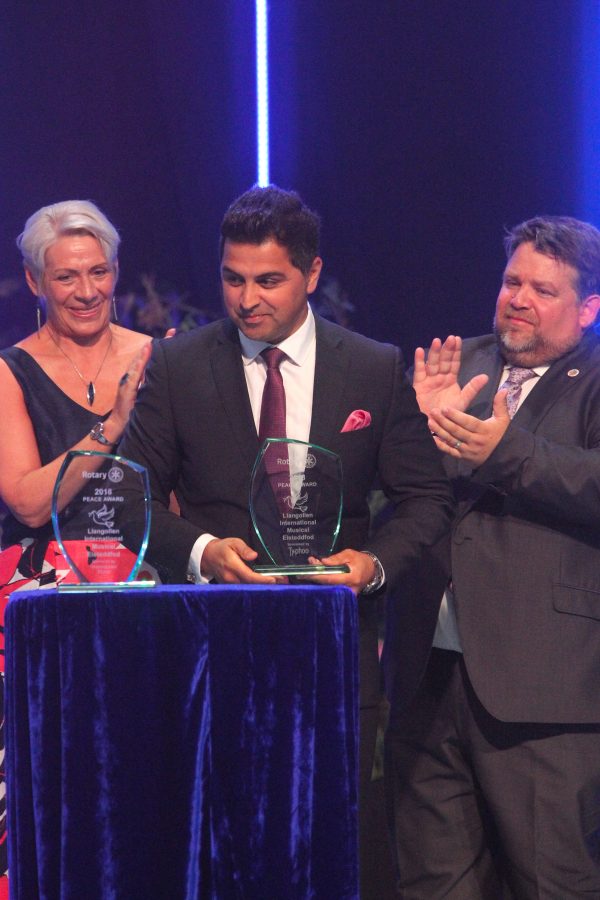 Arian Teleheal wins the international award, while the national accolade is presented to Sara Rowbotham for her outstanding work with the Rochdale Crisis Intervention Team for the NHS

A charity that uses volunteer doctors from the UK and US to advise their colleagues in war zones and low resource countries using encrypted social media has won the Rotary International Peace Award.

Dr. Waheed Arian and the Arian Teleheal charity was awarded the accolade, which is sponsored by Typhoo Tea, during the renowned International Celebration concert at the Llangollen International Musical Eisteddfod on Thursday 5th July.

Dr. Arian was acknowledged for his pioneering charity, Arian Teleheal, which connects doctors in the UK, US and other countries with their peers using their smart phones and Skype or WhatsApp, enabling real-time discussions on the best available care for patients.

Arian Teleheal was set up by in 2015 by Dr Arian, a 34-year-old NHS doctor, who developed the scheme while he was working at Aintree University Hospital in Liverpool. He has recruited over 100 specialists since its launch and the charity has already been credited with saving dozens of lives in Afghanistan and Syria.

Pilot schemes in conjunction with Health Education England are to start in rural areas of Uganda and South Africa and schemes in more African and Asian countries are also planned.

Born and brought up in Afghanistan, Dr Arian’s family later moved to Pakistan where they spent three years living in a refugee camp. Aged 15, Dr Arian came to London alone and with limited English. Four years later he was in Cambridge reading medicine. In September he received a UNESCO award for his work.

The Rotary National Peace Award, supported by Westminsterstone, was also presented at the ceremony. Former social worker, Sara Rowbotham, who was unable to attend the

presentation, was acknowledged for her work with the Rochdale Crisis Intervention Team for the NHS.

As a front line sexual health worker and lead for the crisis team she fought to ensure that the voices of vulnerable young people in her care were heard. Her work played a key role in exposing the Rochdale child sex abuse ring and helped to bring the perpetrators to court.

The presentation of the prestigious awards celebrated the third year of the partnership between the International Eisteddfod and Rotary International, one of the largest humanitarian organisations in the world. The award recognises individuals or organisations responsible for the furtherance of peace though their work.

The partnership is an extension of the aims of both organisations, in particular those fostered by the unique foundations of the International Eisteddfod, which was established to promote peace and harmony between nations.

Speaking following the presentation of the International award, which took place on the stage of the Royal International Pavilion, Dr. Arian said: “I founded Arian Teleheal so that people in terrible conditions around the world could benefit from world-class healthcare through using everyday technology. Our aim is to help local doctors give their patients the best possible care.

“However, by doing this we are also bringing communities together who would otherwise never meet – an off-duty doctor in the UK using her smartphone to help save the life of a young boy in Kabul. They’ll never meet, but his parents know how she has helped, building a connection between these communities which will last forever.

“In addition to our clinical advice, we are increasing our educational sessions for doctors overseas, strengthening the links between people. Our volunteer doctors thoroughly deserve this International Peace Award, which is for all of them, and all the doctors in the countries they help.”

Speaking of being named the winner of the national tier of the award Sara Rowbotham said: “I’d like to thank all at Rotary International for honouring me in such a way. It’s very humbling to know that so many people both support me and recognise the needs of vulnerable young people after being isolated and unheard of for such a long period of time. I’m thrilled to accept this award – thank you.”

The adjudicating panel was chaired by Richard Hazlehurst of Bradford Rotary Peace Centre; who was joined by United Nations peace honouree 2017 and founder of The Peace Project, Jean Best, as a judge.

As peace initiatives take many different forms, the judging panel considered the public benefit of each project, the profile and longevity of each organisation or individual and the impact of their work.

Richard said: “So many of this year’s nominees adhered to simple motto of The Rotary Foundation – do good in the world but both Dr.Waheed Arian and Sara Rowbotham’s contributions stood out.

“Dr. Waheed Arian showed remarkable determination in his journey from refugee camp to highly respected medical practitioner. His imagination and innovation led him to set up a scheme whereby doctors and surgeons working in war-torn areas can consult with colleagues in the UK about individual cases using their smart phones and Skype or WhatsApp, saving lives and improving care for patients across the globe.

“Sara Rowbotham also demonstrated great courage and commitment in her fight to ensure that the voices of vulnerable young people in her community were heard.”

President of the International Eisteddfod, Terry Waite CBE, said: “Once again we were presented with a truly outstanding shortlist for this wonderful award, which made the task of selecting our two winners an incredibly tough job for the adjudicating panel.

“However, it also gave us incredible hope and joy to see just how many people are working towards the very same goal as the International Eisteddfod and Rotary International – the furtherance peace and goodwill in our fragile world.

Past District Governor for Rotary International, Molly Youd, added: “This year’s awards really did build on the success of the past two years. Each and every one of the organisations nominated deserve recognition for their tireless work promoting peace and understanding here in the UK and worldwide, in particular our two winners.

“The International Eisteddfod’s message of global friendship now more relevant than ever and we are delighted that our partnership with the festival has once again allowed us to recognise on a global platform these two remarkable individuals, who are working towards making our world a better, more peaceful place.”