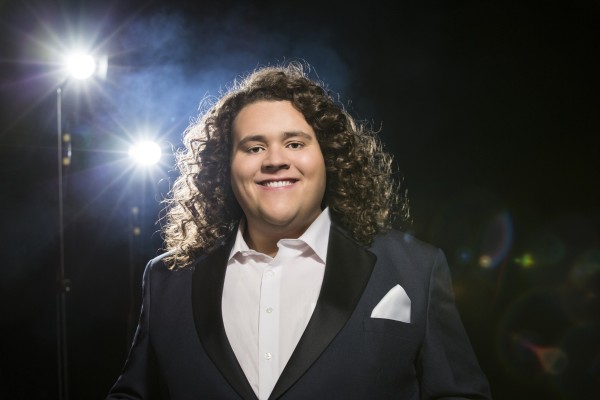 The down-to-earth 20-year-old, who split from singing partner Charlotte Jaconelli last year, can’t wait to step out onto the stage where the great Luciano Pavarotti performed. He said: “Performing at Llangollen is going to be so exciting. It’s a breeding ground for creativity and to be on the same stage that someone like Pavarotti performed on is just a wonderful thought. I’m really, really looking forward to it.”

Jonathan, who rocketed to stardom on the hit ITV show singing with school pal Charlotte, will make his Eisteddfod debut at this year’s festival which runs from Tuesday, July 7, to Sunday, July 12.

He will star alongside fellow tenor Alfie Boe, Welsh nightingale Sophie Evans and saxophonist Amy Dickson in the concert on Thursday, July 9, a celebration of music from stage and screen that’s being sponsored by the Pendine Park care organisation..
He said: “It’s going to be fantastic; we are going to be performing songs from films and stage musicals and maybe even a few television shows.
“I have worked with Alfie Boe once before, we collaborated on an album track. I’m really looking forward to visiting Llangollen – it’s going to be a special night.
“I’m not sure as yet what I will be performing but I know there will be some surprises.”
Among the other highlights at this year’s Eisteddfod will be the Oscar-winning music legend Burt Bacharach, the immensely popular Canadian singer-songwriter Rufus Wainwright and TV choirmaster Gareth Malone.
For the final concert, Ali Campbell, the voice of UB40 who sold 70 million records, who’ll be reunited on the eisteddfod stage with two other founding members of the group, percussionist, trumpet player and vocalist Astro and keyboard player Mickey.
There will also be the world premiere of a new work to celebrate the 150th anniversary of the Welsh colony in Patagonia in a concert that will also star former royal harpist Catrin Finch.
Jonathan, the son of an Essex police inspector, shot to fame after appearing on TV’s Britain’s Got Talent as a 17-year-old alongside his then 16-year-old singing partner Charlotte.
The unlikely looking duo took to the stage, Jonathan in a Jimi Hendrix T-shirt and baggy track suit bottoms, and wowed Simon Cowell who promptly advised Jonathan to ditch Charlotte.
He loyally stuck by her and the pair went on to finish runners up in the 2012 Britain’s Got Talent, losing out to a dancing dog but earning a £1-million recording contract with Cowell’s Syco record label.
Amazingly a YouTube video of their Britain’s Got Talent audition has now been viewed more than 56.5 million times.
Two massively successful top five albums and a sell-out five-city UK tour followed before Jonathan and Charlotte split amicably last year to pursue their own solo careers.
In October 2014 Jonathan released his debut solo album, Tenore, which spent two weeks at the top of the Classical Album Chart and was also a top 20 Official Album Chart hit.
He added: “Basically I understand that singing is now my job. It took me a while to realise it but I understand I only have one shot at getting this right. I have voice training and work on technique and exercise my vocal chords as part of my daily routine.”
Although his appearance on Britain’s Got Talent brought Jonathan’s talent to a wider public audience he had been singing and winning awards from the age of 11.
He worked under voice coach Jenny Ewington and his school’s head of music, Ginette Brown.
At 14, he auditioned for a junior place at the four major music conservatories in London and was accepted at all of them but chose to go to the Royal Academy of Music.
And Jonathan, who still lives at home in Essex with his mum and dad, says he couldn’t be more grateful to his growing army of fans – The Fantoines – many of whom follow him around the UK and pack the audience for every performance.
He said: “It’s so strange to have a fan club but so gratifying. I make sure I try to answer all their questions and requests on Facebook and twitter. I couldn’t be more thankful that they travel so far to see me. It’s actually quite amazing.”
And Jonathan has a busy year ahead of him with a new album due out in October and a possible American tour later in the year.
He said: “It’s so exciting and I really couldn’t be happier. I wake up every day and pinch myself to make sure I’m not dreaming.”
Eilir Owen Griffiths, Musical Director of the Eisteddfod, said: “We are thrilled Jonathan Antoine is joining Alfie Boe, Sophie Evans and Amy Dickson for what will be a very special evening concert featuring songs from the stage, TV and film.
“The reaction on the Eisteddfod’s Facebook page to the news Jonathan will be appearing at Llangollen has, quite frankly, been remarkable.
“It’s wonderful to be able to bring new, young and exciting talent to the Eisteddfod stage and I’m sure the Thursday, Music from Stage and Screen concert is going to be a memorable evening.”