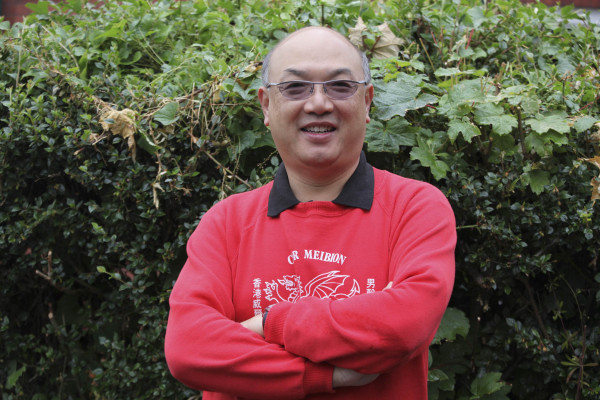 Sorry, this entry is only available in Welsh.

ANYONE visiting from China or Hong Kong will find an especially warm welcome at this week’s Llangollen International Musical Eisteddfod.
Because on hand to greet them with a big smile and in their own language will be a man who fell in love with the annual festival after first attending as a visitor himself and now returning as a volunteer.

Wine expert Bill Kong, 54, who lives in Hong Kong, was mesmerised by the intoxicating magic of the eisteddfod on his first visit as an audience member two years ago when he fulfilled a long-standing ambition to experience it for himself.
He was so taken with the festival’s captivating atmosphere both then and in 2014 that he was determined to travel back to Llangollen to join the small army of dedicated volunteers who help make the iconic cultural event such a big hit each year.
Bill’s links with Britain go back over 40 years to when he attended a prep school near Bewdley in Worcestershire then a public school near Uttoxeter in Staffordshire.
Later he went on to Manchester College, Oxford, to study for a degree in social administration before returning to Hong Kong in 1984.
Bill joined the Hong Kong Welsh Male Voice Choir there a couple of years later after being introduced to it by a friend.
He recalled: “My fellow choir members used to ask what my Welsh link was and I’d tell them that it was my old prep school in Worcestershire which was quite near the Welsh border.
“I performed with the choir in the London Welsh Festival of Male Voice Choirs at the Royal Albert Hall in 2004 at the invitation of the London Welsh and sang with in the chorus of the Hong Kong Art Festival’s production of Tosca in in 1999, which is where I met my wife Selena.”
When he’s not drinking in the joys of music Bill works as a consultant in the wine business in Hong Kong and during the past 10 years has been a wine importer, educator, consultant to importers and wine judge.
He is also a senior training consultant for a large Hong Kong-based company specialising in risk and crisis management.
Bill’s 39-year-old wife, Selena Hoi Yi Fung Kong, is also passionate about music and has worked as a music educator at a school in Hong Kong for the past 17 years.
They have a 10-year-old son, Daniel, who began at a prep school in England in the spring.
Bill said: “We came over to the UK in April, partly so we could bring Daniel to his new school and also because my wife Selena has been awarded a fellowship which is enabling her to train as a music teacher and for which she has had a placement in Kent.
“The main reason though was that I just had to come back to the eisteddfod because I love everything about it.
“I originally came as a visitor a couple of years ago but I knew I simply had to return to Llangollen.
“This week I’m working as a volunteer with a number of the committees, including backstage and hospitality.
“I gained experience of staging while I was with Welsh choirs festival at the Royal Albert Hall but on the hospitality side, using the language, I’ve been helping welcome the competitors and visitors from China.
“Selena’s been helping out too because, if anything, she’s a bit better at speaking Chinese than I am.
“I’m having a fantastic time at the eisteddfod and loving every minute of it.”
He added: “When I first came to the eisteddfod as a visitor two years ago I didn’t know anyone but since then I’ve met some wonderful people and made some amazing friends.
“Being back here and playing a part in helping to see the eisteddfod goes smoothly is one of the proudest moments of my life.”
Gethin Davies, Chairman of the Eisteddfod, said: “What a wonderful story and it’s so typical of the magic and the appeal that this great festival of ours has.
“We’re delighted to welcome Bill and his wife to the great list of those who have played their part in making the International Eisteddfod, just that, truly international.”