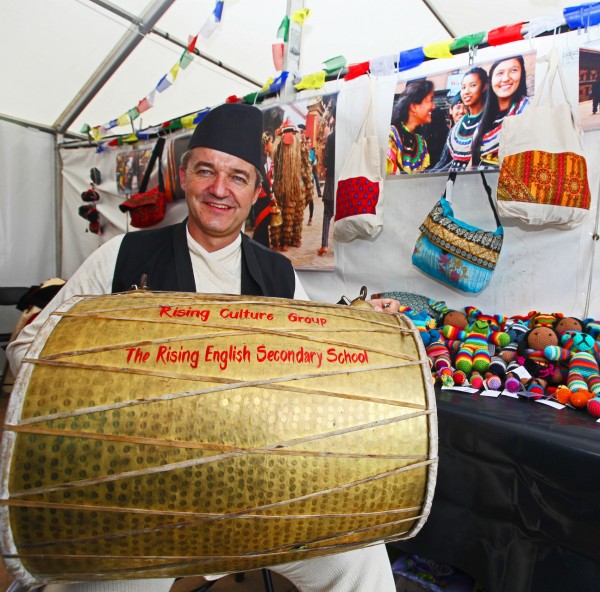 A GROUP of young dancers from Nepal who endured the earthquakes which devastated their country will take centre stage at Llangollen International Musical Eisteddfod on Saturday.
Thanks to a major fundraising drive, more than 30 members of the Rising Culture Group from the World Heritage site of Bhaktapur, about 10 miles from the Nepalese capital of Kathmandu and around 100 miles from Mount Everest, had been planning to travel 5,000 miles to compete at the Eisteddfod this week.
Then their dream of coming to Llangollen suffered a huge setback when their region was shattered by two massive earthquakes within weeks in April and May, which claimed thousands of lives and caused widespread destruction.

But thanks to the man who has been the guiding force behind their Eisteddfod appearance and their own determination, a token contingent of five group members have been making their way to Wales this week and will now perform their traditional mahkali mask dance on the main stage at Llangollen at 1.30pm on Saturday.
New Zealander Todd Lochhead, the man leading the effort to bring the dancers to the Eisteddfod, first saw Rising Culture perform when he was working as a teacher at the Rising English School where they based in Bhaktapur, which is run by his friend Kapil Banebepali and his wife Chandika.
He was so impressed by their colourful routines, which date back hundreds of years, that he became determined they should be given an international showcase at Llangollen.
Since the earthquakes, 46-year-old Todd, who works as a financial consultant in Bristol, has kept in constant touch with the group and personally shared their tribulations on two visits to Bhaktapur.
He was shocked by the destruction on the ground which saw many homes, shops and commercial buildings totally destroyed.
Around 600 people in the town are thought to have died, mainly in the first quake.
Many people from the surrounding area sought sanctuary in the school building which was left largely untouched because of its concrete construction, sleeping in the open on matting in the courtyard and sharing meagre supplies of food.
Although all members of the group survived, some lost relatives.
But, despite what they had suffered, the group remained determined that at least some of them would make it to Llangollen.
And after overcoming visa problems, five of them in their twenties and early teens will appear at the Eisteddfod on Saturday.
Todd said: “All of them apart from one have never been out of Nepal before, so this is a great adventure for them which they are all looking forward to immensely.
“Every step of the way their determination to make it to Llangollen has been unstoppable.
“This will be an absolutely new experience for them.
“They have obviously been through some very trying times but I know they will grasp this opportunity to shine at the Eisteddfod.”
He added: “They are all excited about performing their mask dance, accompanying themselves on their traditional dhimmy drums and flutes.
“And of course they will all be wearing their fantastically colourful costumes, the origins of which go back centuries.
“People who see them are in for a real treat.”
All this week Todd has been running a stand on the field, donated by Eisteddfod organisers, selling a range of craft items, including soft toys, jewellery, pashminas and bags, to raise money for the Nepal earthquake appeal.
Todd said: “The Eisteddfod has been great in helping us to set up the stand.
“We’ve had a lot of interest from visitors and sold quite a few items, which is fantastic as every penny we raise will help people who have lost so much in the marvellous country I first fell in love with 20 years ago.”
Eisteddfod Musical Director Eilir Owen Griffiths was delighted the group is to appear.
He said: “They will be on stage just before the dance competitions begin, which is always sees the auditorium full.
“The work which has gone on behind the scenes to see that this group gets to Llangollen has been phenomenal.
“We are honoured to have them because when someone’s country has been devastated to the extent theirs has the last thing you’d expect them to do is travel across the world to perform.
“The fact that they have is quite magical.”