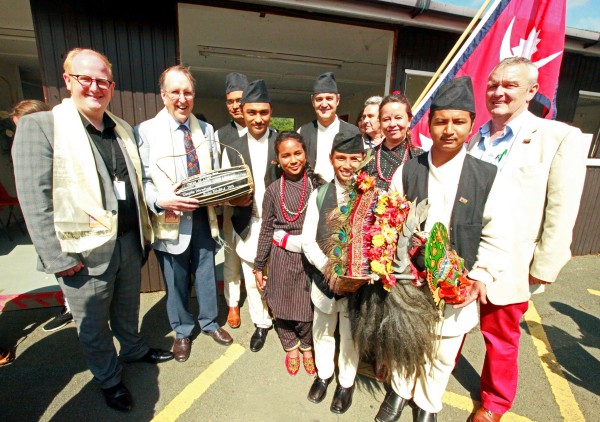 LEADERS of Llangollen International Musical Eisteddfod formed a guard of honour to greet a group of young Nepalese dancers who endured the earthquakes which devastated their country when they arrived to perform at the festival..
A reception committee including Eisteddfod Chairman Gethin Davies, Vice-Chairman Rhys Davies, Chief Executive David Neal and Musical Director Eilir Owen Griffiths, along with scores of volunteers and visitors, waited at the main entrance to give a warm Welsh reception to the five musicians from the Rising Culture Group who had a gruelling 28-hour journey to reach Llangollen.

Before they arrived at the gate they were serenaded by members of the Ar-Ol-Tri Male Voice Choir from Cardigan who gave them a rousing chorus of the hymn Calon Lan.
Responding to loud cheers and applause, the Rising Culture performers – four boys aged 12 to early twenties and a 12-year-old girl – then handed out souvenir silk scarves to the Eisteddfod leaders and there was also a miniature of the traditional drums they play for the delighted Chairman.
Later in the day the Nepalese, three of whom lost their homes in the first earthquake, had an equally rapturous reception when they took to the Eisteddfod’s main stage to perform part of their centuries-old mask dance.
There was standing ovation from the audience which, according to Eisteddfod Chairman Gethin Davies, was the first he had ever seen for a daytime performance.
The group repeated their dance during the evening performance featuring Choir of the World and Gareth Malone.
Their Llangollen appearance came as the fulfilment of a dream to perform in Llangollen.
Planning to bring over 30 members of the group 5,000 miles from the World Heritage site of Bhaktapur, which is about 10 miles from the Nepalese capital of Kathmandu and around 100 miles from Mount Everest, began last December with a major fundraising campaign.
The scheme then suffered a huge setback when the region was shattered by two massive earthquakes within weeks in April and May, which claimed thousands of lives and caused widespread destruction.
But, thanks to the man who has been the guiding force behind their Eisteddfod appearance and their own determination, the token contingent of five group members were able to make their way to Llangollen in time to take centre stage on the festival’s penultimate day.
New Zealander Todd Lochhead, the man leading the effort to bring the dancers to the Eisteddfod, first saw Rising Culture perform when he was working as a teacher at the Rising English School where they based in Bhaktapur, which is run by his friend Kapil Banebepali and his wife Chandika.
He was so impressed by their colourful routines, which date back hundreds of years, that he became determined they should be given an international showcase at Llangollen.
Since the earthquakes, 46-year-old Todd, who works as a financial consultant in Bristol, has kept in constant touch with the group and personally shared their tribulations on two visits to Bhaktapur.
He was shocked by the destruction on the ground which saw many homes, shops and commercial buildings totally destroyed.
Around 600 people in the town are thought to have died, mainly in the first quake.
Many people from the surrounding area sought sanctuary in the school building which was left largely untouched because of its concrete construction, sleeping in the open on matting in the courtyard and sharing meagre supplies of food.
Although all members of the group survived, some lost relatives.
But, despite what they had suffered, the group remained determined that at least some of them would make it to Llangollen.
After they came off stage from their afternoon performance, Todd said: “I’m just overwhelmed by the reception they got from audience, which helped to make all the effort into getting to Llangollen worthwhile.
“This is a sign of hope and perhaps just the beginning of something for the group.
“I’m extremely grateful to everyone who helped make this trip possible.”
Youngest member of the group, 12-year-old Roshik Jadhari and his 13-year-old sister, Roshika were amongst those who lost their homes in the first earthquake.
They first found shelter in a tent but are now in a new rented home.
Roshik said after performing the mask dance: “I have never danced in front of so many people before but I really enjoyed myself and felt very proud to be here.”
Eisteddfod Chairman Gethin Davies said: “As Rising Culture was to be the first ever group from Nepal we were delighted to accept their application last year.
“Then the earthquakes struck and the whole plan was thrown into disarray.
“There has since been a lot of hard work going on to bring a small, representative group to the Eisteddfod and we were utterly thrilled to welcome them to our festival.
“Their performances on Saturday were marvellous and the standing ovation they received after the one in the afternoon was the first I have ever seen here during the daytime.”
When they came off stage, the group were invited over to the Lions Club International stand on the field to receive a donation of £1,000 from Wrexham Lions Club which had been raising the money from a variety of events over the past four months.
They also visited the stand of Rotary International, where Llangollen Rotary Club had donated the cost of their travel within the UK.

Nepal group arrive and are greeted by a Welsh Choir.