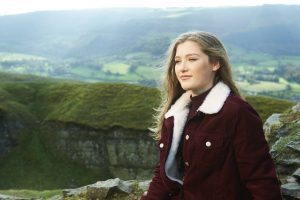 * STAR OF ITV PRIMETIME SHOW ‘THIS TIME NEXT YEAR’

A year ago, Welsh schoolgirl Elan made a pledge to Davina McCall on ‘This Time Next Year’, ITV’s life-transforming programme on which Davina asks, “By this time next year what do you want to achieve?” Elan, who was then just 14, confessed her dream to Davina: “I want to make an album.”

“I said it was my dream,” Elan says. “But to be honest, I couldn’t even begin to imagine how I could do something like that. In fact it was so far beyond my wildest dreams I didn’t even dare think about it.”

Charming, modest and natural, Elan (a classic Welsh name pronounced ‘El-Ann’) had been competing since the age of four in the traditional Eisteddfod singing contests – a major festival series in Wales, celebrating music and culture and reaching over 150,000 people each year – ranging from local to county and then national level. It’s considered the largest music and poetry festival in Europe. Elan was a veteran of the competition stage: “I’ve always loved music and singing. There’s a video of me aged two playing a toy keyboard and singing, and when I was in Nursery I saw older friends competing and I thought, ‘I want to be like them.’”

Pure, fresh and authentic, her beautiful voice – as easy as breathing – soars so effortlessly that, even in a country renowned for its singing, she is a stand-out.

And as viewers saw when ‘This Time Next Year’ was screened in May, she did indeed realise her dream. In the whirlwind year which has passed since the original filming when she made her pledge to Davina, she has been signed by Decca and has spent the months since recording tracks for her new album. And all the while studying for her GCSE’s!

Such is the format of the show, one of the hardest parts for Elan was keeping the secret of her exciting journey for a whole year: “Luckily I could discuss it and share it with my family and close friends, and I’ve never been one to brag about what I do, but a year is a long time!”

“It was so exciting for me to film that,” she says, “ Davina was so lovely, and made it very easy, because it was all new to me – having my hair and make-up done professionally, I don’t usually wear much make-up! I wore a new red dress which she said she liked. But of course the most important and wonderful thing is that I was signed, and I’ve made an album which I love.”

Elan, who lives in north Wales near Wrexham with her parents Bethan and Dave Parry, and younger sister Calan, has recorded an album filled with songs that mean a lot to her: “Musically it’s a cross-over of folky songs and classic pop,” she says. She speaks Welsh at home, and songs on the album are in both Welsh and English.

“One is my favourites is Anfonaf Angel. Obviously very few people have heard my recording, because of having to keep things secret, but I played it to my grandmother and she cried. It was a song that was played at my grandfather’s funeral. Guardian Angel, the English version, is also on the album.”

Elan, who is taking GCSE’s in History, Art and PE, wants to go to university. She plays the piano (“I love to play classical pieces, anything I can find”), the clarinet, and has a drum kit at home (“yes, my parents have earplugs!”) She also plays the harp: “Although not so much, I don’t have lessons any more because I just can’t fit them in.”

It’s not surprising! She also loves sport, plays netball for the county and runs, and made the Welsh finals of Cross Country. And she would surf every day if she could.

“If I could be another creature it would be a mermaid, which is silly because they don’t exist! But I love the beach and the sea so much.”

Her first love, of course, is singing: “This is such an exciting time for me, and I realise how fortunate I’ve been. How did all this happen to me? But I’m just grateful that it has.”

Elan released her debut album ‘Angel’ in August 2018 and reach No 1 In the Itunes Classical download charts.

Elan has recently supported John Owen Jones on the Welsh leg of his Spotlight Tour. She was  also delighted to be invited to perform at the London Welsh Male Voice  Gala Concert at the Royal Albert Hall in October, and will perform at the Only Men Aloud concert at Venue Cymru, Llandudno in November.