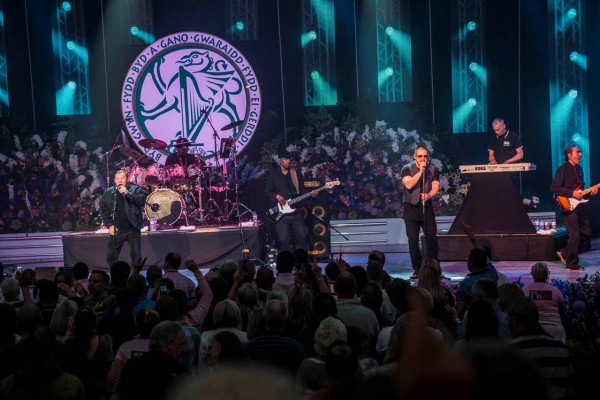 The music legend who formed one of the world’s top reggae bands provided a foot-stomping climax to the Llangollen International Eisteddfod.
Ali Campbell, the voice of UB40 who sold 70 million records, soon had the audience on its feet at the closing concert of the iconic festival, where they delighted the crowd with their back catalogue of hits.
He was reunited on the eisteddfod stage with two other founding members of UB40 – percussionist, trumpet player and vocalist Astro and keyboard player Mickey.

The concert was sponsored by the award-winning Village Bakery, the fastest growing manufacturer in Wales.
Managing Director Robin Jones said: “As a locally based family firm, we are proud to have supported the Llangollen International Musical Eisteddfod for a number of years.
“UB40 played an important role in the history of world music so it was appropriate that Ali Campbell, Astro and Mickey brought the curtain down on this year’s International Eisteddfod. It was a fantastic night.”
Father-of-eight Campbell, now 56, was born and raised in Birmingham and says his love of reggae comes from the fact most of his early mates were of West Indian descent who listened to reggae most of the time.
He added: “Reggae just gives you something different, a freedom I suppose. It’s probably the youngest genre around but I listen to music from all around the world and the reggae influence is massive. It’s so influential.”
Plans are in hand for next year’s event with classical singing sensation Katherine Jenkins OBE already signed up to star at the opening concert at the 2016 event.
The talented mezzo soprano will be treating the audience to a concert version of Georges Bizet’s opera, Carmen, the tale of the downfall of Don José, a naïve soldier seduced by the fiery Gypsy.
It will be the first opportunity fans of Jenkins will have to hear her sing all of Carmen’s operatic arias in one performance.
Tickets went on sale at noon today (Monday, July 13).
Retiring chairman Gethin Davies, who announced during the week, he was stepping down from the role he has carried out with great distinction, says things look set for its a successful 70th anniversary event next year.
“We have had some extremely appreciative audiences who have been most enthusiastic throughout the week,” he said.
“During the course of the festival we have been treated to a feast of music – choral, individual and instrumental – and some colourful and spectacular dancing.
“The opening concert on Monday by Burt Bacharach was outstanding.
“To see an icon of the musical world coming to Llangollen to perform all his wonderful songs was an enormous pleasure.
“All the evening concerts were well received, and the one on Friday by Rufus Wainwright was very entertaining and enjoyable as he is clearly a highly talented man.
“His sister Lucy, who performed on stage with him, was full of charm and had the audience in the palm of her hand.
“When Rufus was with us he was reminiscing about his music teacher in Montreal, Iwan Edwards, and we discovered that my wife Eulanwy and I knew him at Aberystwyth University and that he has been to Llangollen Eisteddfod on several occasions conducting competing choirs.”
Gethin added: “With the way things have gone this year I think we are fair set for a successful festival next year.”