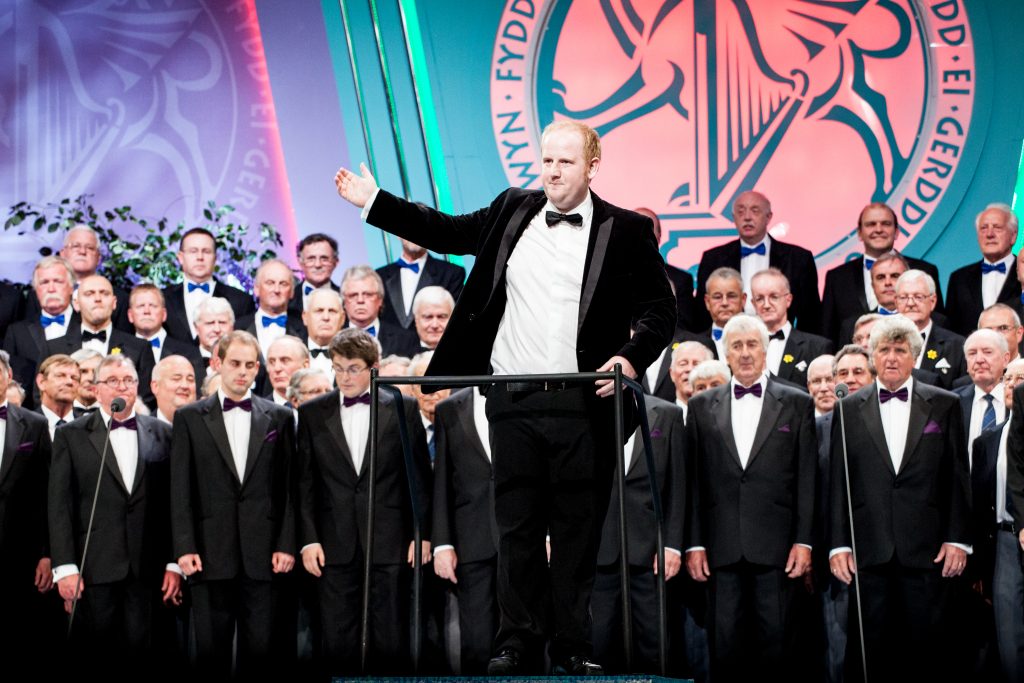 After six years in the prestigious role of Music Director at the Llangollen International Musical Eisteddfod, Eilir Owen Griffiths will step down from the position after this year’s 70th anniversary festival.

The International Eisteddfod’s youngest ever Music Director will leave following this year’s event in July, giving him more opportunity to concentrate on new developments within the University of Wales Trinity Saint David, composition projects and also to spend precious time with his young family.

During his tenure, Eilir introduced the Children’s Choir of the World Competition, Voice of The Future and International Voice of Musical Theatre Competition, as well and developing the Outreach and Inclusion Projects, which recently won the Scottish Power Community Award.

His ambitious programing has also pulled together large scale concerts including Sweeney Todd with a cast of 150, and a star studded Carmen last year.

He has been integral in drawing national audiences across the border by securing performances from global artists such as Status Quo, UB40, Burt Bacharach, Jools Holland, Caro Emerald and Rufus Wainwright. Adding to this impressive list of achievements, he has also sustained high quality artists that the International Eisteddfod is famous for, including Sir Bryn Terfel, Joseph Calleja, Catrin Finch, Noah Stewart, Alison Balsom, Nicola Benedetti and Karl Jenkins, to name just a few.

Prior to his appointment in 2011, Eilir attended the Llangollen Eisteddfod as a competitor and performed in the famous Royal International Pavilion in 1998 with Ysgol Glan Clwyd and with his award-winning choir CF1 in 2010.

Eilir said: “It is difficult to sum up six incredible years. I am proud to be ending my time at the Llangollen Eisteddfod on such a high and it’s such an honour to be bowing out after the 70th anniversary festival. I’m excited to see the team’s hard work culminate in what promises to be a wonderful celebratory year.

“I’ve been lucky that throughout my time as Music Director I’ve been able to work on projects I’m extremely passionate about. From the start I was keen to increase opportunities for young performers to get involved with the festival which is what led me to start the Children’s Choir of the World Competition, Voice of the Future and Young Musician Competitions, which I hope will be a part of my legacy.

“The Music Director’s role is a very challenging one and I couldn’t have done it without the support of the dedicated staff, partners, sponsors and of course the volunteers that have work alongside me for the last six years.”

Speaking of his favorite moments during his time at the Llangollen Eisteddfod, Eilir added: “There have been too many ‘pinch myself’ moments to mention. One was definitely the performance of Sweeney Todd with Sir Bryn Terfel in 2014 and another was when Noah Stewart, the American operatic tenor, performed my original arrangement of Calon Lan in Welsh. To top it off, where else but Llangollen could you sit down and have a post-concert drink with three world-renowned figures, Burt Bacharach, Paul Mealor and Terry Waite?

“I feel content with the six years that I have had as the Music Director of Llangollen. I have a number of fond memories and I hope that I will return in years to come as either an audience member or even compete!

“But before I hang up my hat there is this year’s International Eisteddfod to enjoy. There are so many highlights this year and in particular I am looking forward to enjoying Gregory Porter on Friday 7th July.”

Llangollen International Musical Eisteddfod Chairman, Dr Rhys Davies, added: “Eilir’s unwavering enthusiasm is infectious and it has been a joy to work with him over the past six years, creating unique and memorable festivals each year.

“Eilir’s contribution to the festival programme, through the talent he has signed up to perform and also the competition and community elements he has developed, will be a fitting legacy. Throughout his time with us he has remained true to the core principles of the International Eisteddfod – uniting people together in peace and friendship through music and dance.

“His last Eisteddfod continues in the same vein as his previous – diverse, contemporary and star-studded. Bringing together global artists including the Manics, Huw Stephens, Kristine Opolais, Gregory Porter, Sir Bryn Terfel Christopher Tin and Reverend and The Makers on the same line up has been no mean feat. We really can’t wait to see Eilir’s grand finale come together.”

The Llangollen International Musical Eisteddfod is currently recruiting for the role of Music Director to start this summer. Should you wish to apply for the role, contact Chief Operations Officer Siân Eagar at the Llangollen Eisteddfod office on 01978 862 000.