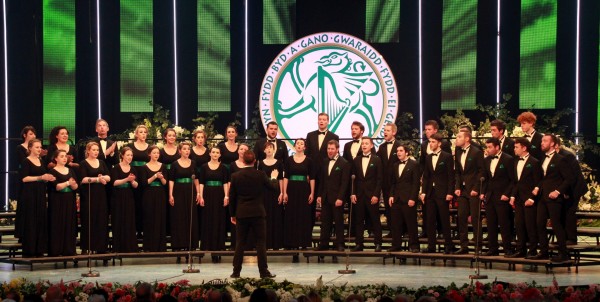 Irish eyes were smiling after the final two major competitions of the week at the Llangollen International Music Eisteddfod.
The Maynooth University Chamber Choir, based in Kildare, in the Republic of Ireland took the Pavarotti Choir of the World trophy after fighting off stiff competition from two English choirs, one from Wales and one from the US state of California.

The girls from Loughgiel Folk Dance in Northern Ireland were for the second year running crowned dance champions after lifting the Lucille Armstrong Trophy following a performance that earned them a standing ovation.
But it was the five Nepalese performers who finally arrived at Llangollen on the Saturday morning who won the hearts of those privileged to be present after putting on a short cultural dance routine that brought tears to the eyes of the near capacity audience.
The evening got underway with a performance from the UK’s favourite choirmaster, Gareth Malone and his Voices choir who wowed the audience with a sublime performance.
They were later joined on stage by members of two of the week’s competing choirs, The Azusa Pacific University Singers from California and Dutch choir, Snowe for a performance of Simon and Garfunkel’s Bridge Over Troubled Waters which also had the audience standing and demanding more.
Following the presentation of the two trophies, the Musical Director of the Llangollen International Music Eisteddfod, Eilir Owen Griffiths, said: “What a fantastic night of competition and entertainment we have witnessed and enjoyed. The Irish certainly shone tonight.
“The choral singing we had the privilege to hear was, as you would expect for Llangollen, quite frankly world class.
“And the dancing left me speechless at the skill, colour and interpretation. All the performances were just incredible and adjudicating gets harder and harder every year. What a breathtakingly stunning evening we have witnessed.”
An emotional Michael Dawson, the conductor of the winning Maynooth University Chamber Choir said: “Amazing, what a night. In fact what a week we have had here in Llangollen. This is a dream come true.
“We have enjoyed everything about our visit from singing mass in a local church and been treated to such wonderful hospitality. To win this magnificent trophy is just amazing and we are all absolutely thrilled and over the moon.”
He added: “I first came here as a 17-year-old and sang as part of a competing choir. To return here now aged 25 as a conductor and to win is just unbelievable.”
Lisa Gillian, who teaches the Loughgiel Folk Dance along with Denise Dobbin and Collette O’Mullan said: “To be crowned dance champions for the second year running is amazing.
“We have been competing here for 22 years and although we have won before believe me every year gets harder and harder and the standard higher and higher.
“We value every competition we enter and win but Llangollen is always a massive highlight of our year. We will be back!”
Captions
The Maynooth University Chamber Choir perform
The Loughgiel Folk Dance group performs.
Gareth Malone
The Musical Director of the Llangollen International Music Eisteddfod Eilir Owen Griffiths celebrates with members of the The Maynooth University Chamber Choir and The Loughgiel Folk Dancers.
President of the Llangollen International Music Eisteddfod Terry Waite CBE celebrates with members of the The Maynooth University Chamber Choir and The Loughgiel Folk Dancers.
Chair of the Llangollen International Music Eisteddfod Gethin Davies OBE and his wife award the Lucille Armstrong Trophy to The Loughgiel Folk Dance group’s Lisa Gillian.
The Nepalese dancers put on a stunning show.