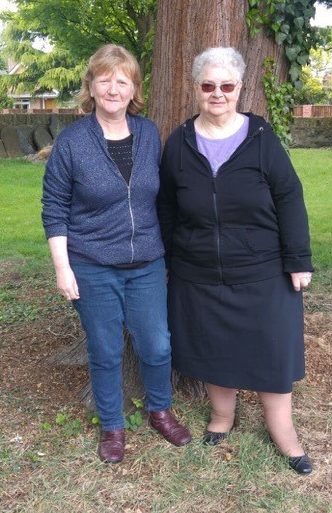 Wrexham residents and mother-daughter duo Helen Hayward and Betty Jones will be celebrating a life-long devotion to the Llangollen International Musical Eisteddfod this year by performing in the Celebration Chorus on Wednesday 5th July – the first time they have performed together.

They will both appear in the performance of Calling All Nations with renowned international composer Christopher Tin, which will mark Betty’s 71st festival.

Betty said: “My involvement with the Llangollen Eisteddfod began at an early age. My mother and father hosted competitors at our home in Froncysyllte for the first Eisteddfod, you could say that was the beginning of a lifetime of commitment to the festival.

“When I married Arnold, he was told that if he wasn’t involved with the International Eisteddfod, he wouldn’t see me for the first week in July every year. Needless to say he signed up. For me, this spirit of togetherness is truly what the Eisteddfod stands for.”

The passion for the festival became a family affair when Helen began volunteering at the Llangollen Eisteddfod and then later introducing her husband Neil, who is currently the Chief Steward, and children, confirming three generations love for the International Eisteddfod.

“I’ve only ever missed two festivals and even made it to the 1988 festival 10 days after the birth of my son – the ‘Eisteddfod blues’ were just too much to handle!” said Helen.

“This year, not only attending the Llangollen Eisteddfod but performing next to my mum will be truly amazing.”

Betty continued: “I just love the Llangollen Eisteddfod and this is my second time performing on the International Pavilion stage. In 1952 I performed as part of the choir from Llangollen Grammar School – now Ysgol Dinas Bran – and we claimed second place in the children’s competition. This was an incredibly special experience for me and really confirmed my love of singing.

“However, I think this year will be even more special as performing alongside my daughter is a once-in-a-lifetime experience we’ll both treasure forever.”

Speaking of their favourite moments from the collective 120 visits, Helen said: “For me, being in the same room as José Carreras and watching him perform was just incredible. I can’t put into words how honoured I was to see him live. The International Eisteddfod does truly bring world-class talent to Llangollen, which is one of the reasons I love it so much.”

Betty added: “In 1955 I hosted the Modena Male Voice Choir, one of whom was a young Pavarotti. I later saw him perform as a soloist. Both of these are experiences I wouldn’t have had without the International Eisteddfod. For that I will be forever grateful.”