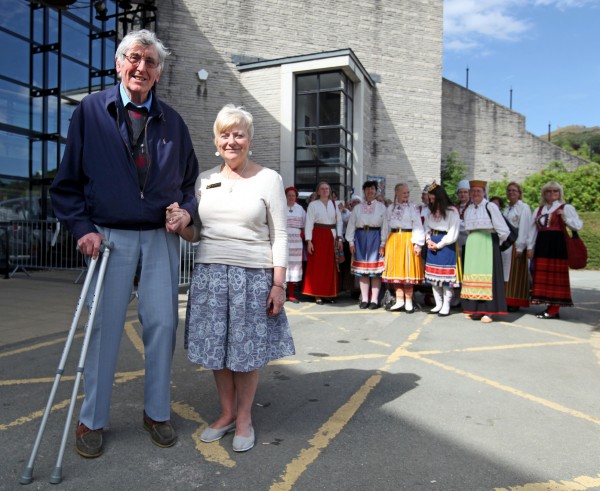 A MAN who has attended Llangollen International Musical Eisteddfod every year since it started turned up for his 69th consecutive festival last week.
Elwyn Jones was at the very first Eisteddfod as an 18-year-old boy in 1947 and at 87 is proud of the fact he hasn’t missed once since.

As he arrived for his latest date with the iconic event, he said: “Although it has changed quite a bit over the years it’s still the same amazing event that it always was and it’s been a big part of my life.”
Elwyn, who later moved to live in West Kirby on the Wirral where he now has his home, was born and raised just a few miles away from the Eisteddfod field in the small village of Garth.
He recalls cycling over the hills to school at what was then Llangollen Grammar School and is now Ysgol Dinas Bran.
From there he went on to Bangor to study for a chemistry degree.
In 1949 he started work in the engineering department at the former Manweb electricity supply company and rose through the ranks from clerk to the senior position of mains manager before his retirement in 1992.
Elwyn was at the inaugural Eisteddfod, which was started not long after the end of the Second World War to help foster international peace and reconciliation, in June 1947.
He said: “In those days and until the new field and Pavilion was opened in the early 1990s, the Eisteddfod was held on the recreation field on the other side of the canal.
“Everything was based in a big tent which used to leak every time it rained.
“Apart from being an enthusiastic visitor, through my job at Manweb, I was also responsible for maintaining the power supply to the field.
“When I came along to the Eisteddfod as a visitor I used to arrive every morning at 9am and stay all day, watching as many competitions and performers as I could fit in.
“The whole thing often went on until well after midnight and I remember one singer saying he would keep on performing until everyone had gone.
“I was also here the year the first German contestants, the choir from Lubeck, came in 1949.
“This was soon after the end of the war and people were a bit concerned about how the visit would go but in the end they had a marvellous reception.
“I’ve also been here for many of the big name performers at the evening concerts, including Luciano Pavarotti, of course. But I also remember another powerful singer from Italy called Paolo Silveri back in the 1950s.
“I still see as many evening concerts as I can and they’re fantastic entertainment.”
Elwyn was at this year’s Eisteddfod with his 82-year-old wife, Cathy, who has herself been with him to every festival for the past 60 years.
Llangollen has become something a family affair for the Joneses as their son Richard Meurig, now 50, worked as a volunteer in the music department as a youngster.
The couple have made many friends at the annual event, including a man from an Algerian choir who lived in Paris whom they first met when he was lodging with Elwyn’s mother in Garth during an early Eisteddfod and kept in touch with for many years.
Elwyn said: “I keep coming back to Llangollen because it’s such a big part of my life which I look forward to every year.
“I love the music but I also love the fact that the people you meet are so kind and seem to absorb you into a big family.
“It’s also amazing how everything runs so smoothly with such a small full-time staff and hundreds of volunteers.
“I’m going to keep coming back to Llangollen for as long as I can and I definitely hope to be here when the festival has its 70th birthday.”
Eisteddfod Chairman Gethin Davies said: “It’s a great thrill to know that we still have people coming to Llangollen who attended the very first Eisteddfod.
“The fact that this gentleman has been coming since 1947 is heart-warming, encouraging and almost unbelievable.”
Caption: Elwyn Jones with Christine Dukes from the Llangollen Eisteddfod.