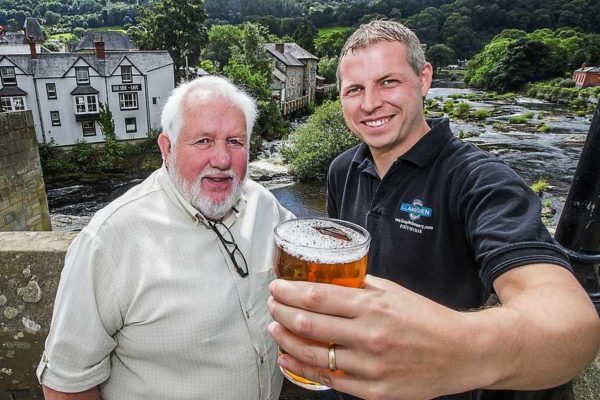 A craft brewery has created a special ale so beer lovers can raise a hearty toast to Llangollen International Musical Festival’s landmark 70th anniversary next year.

Ynyr Evans, who heads up the popular Llangollen Brewery based in Llantysilio just up the road from the famous Eisteddfod site, will be helping ale aficionados say cheers to the iconic annual cultural event when he launches the tasty new brew at this year’s Hamper Llangollen food festival.

And he reckons they’re in for a real treat when they taste his Harmony Ale, inspired by the Eisteddfod’s proud heritage of using music to promote peace and understanding amongst nations.

Thousands of foodies are expected to flock to the popular food festival which will see the Denbighshire tourist town become the culinary capital of Wales over the weekend of October 15 and 16.

Next July’s Eisteddfod will see a round of celebrations to mark 70 years since the very first festival was held in 1947 to foster international reconciliation and friendship in the dark years just after the end of World War Two.

It was with this in mind that 31-year-old Ynyr decided to produce the new ale which he says is specially blended to create a subtly harmonious flavour.

“I’ve been working on the new ale for some months now because I wanted to get the taste just right,” he explained.

“It’s a medium brown traditional bitter which is well-hopped to produce subtle after-tones conveying the Eisteddfod’s atmosphere of harmony.

“I love the festival and have been going there for many years both as a visitor and supplier of beer. for the on-field and indoor bars.”

To come up with the new Harmony Ale, Ynyr has brought to bear years of brewing experience which began when he and his uncle Steven Evans, who owns the Abbey Grange Hotel and a number of pubs in the area, went into the beer making business together back in 2010.

Their new brewery was based in what had been the Abbey Grange’s farm shop on the road up to the Horseshoe Pass and close to historic Valle Crucis Abbey.

Ynyr, who had previously obtained a degree in geography and a master’s degree in countryside management, recalls that in the early days they were producing just 250 litres of ale per brewing but that expansion of the operation rapidly followed.

He said: “We extended the brewery into the old stables behind the hotel and gradually upped our production to our current 2,200 litres per brew and also increased our staff to three full-timers and two part-timers.

“We sell to scores of pubs across North Wales and into the North West of England but concentrate very much on looking after our local customer base.

“We only use the finest ingredients and local underground water source to produce our distinctive country ales, which include Llangollen and Welsh Black Bitters, Grange No. 1 and Wrexham Borders pale ales and Llangollen Lager.

“A couple of years ago we created a beer named Holy Grail inspired by a local legend involving the great Cistercian abbey of Valle Crucis and Dinas Bran Castle, on the hilltop towering over Llangollen.

“According to the story, the castle is the final resting place for the Holy Grail, the cup that Christ drank from at the Last Supper and that there is a tunnel all the way down to the abbey below.

“We launched it at Hamper Llangollen and it went down so well that we’ve kept it in our product line-up.

“We’re doing a single brew of the new Harmony Ale, which means we’ll have 2,200 litres in nine gallon casks selling at about £3 a pint.

“Apart from launching it on our stand at the food festival we’ll also put some of it into local pubs to see what people think of it. If it does we’ll consider keeping it too.

“We’re really looking forward to being at Hamper Llangollen again because it’s such a popular festival which we’d never think of missing and I can’t wait to unveil the new Harmony Ale.”

Eisteddfod marketing officer Megan McNutt was very impressed that Ynyr had taken the trouble to brew up the new ale especially for the festival’s landmark anniversary.

“It’s a lovely idea and we’re very grateful to him,” she said.

“It’s particularly nice to see the Eisteddfod being supported in this way by a very prominent local enterprise because apart from its international outlook, our festival relies very heavily on community support.”

He said: “I think it’s a wonderful idea to create a new ale to celebrate this major milestone in the Eisteddfod’s history.

“The fact that the brewery has chosen to launch it at Hamper Llangollen is a perfect way of bringing two of the town’s iconic festivals together.

“We’re looking forward to a really special event this year. Thanks to a whole host of indigenous companies, North East Wales is rapidly establishing a reputation as a centre of excellence for high quality cuisine.

“The food festival is a perfect shop window for the companies who form the backbone of our rural economy.

“The location of the Pavilion is absolutely spectacular – I can’t imagine that any other food festival in the UK has a more beautiful setting.”