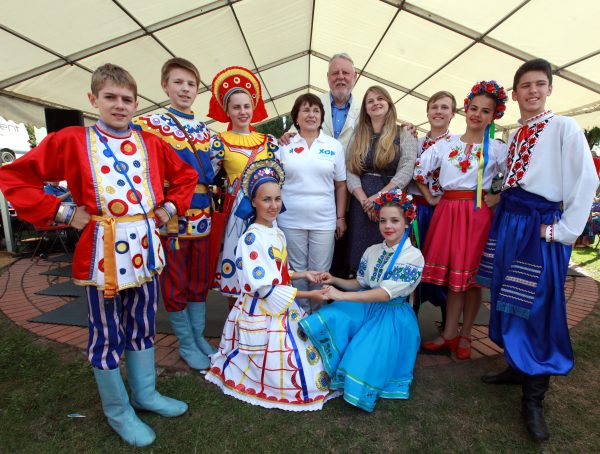 The Rotary International Peace Award, which recognises peace initiatives both in the UK and internationally, is now receiving entries from nominees until 4th June 2018

Llangollen International Musical Eisteddfod, is encouraging all community members to submit details of local individuals or organisations responsible for the furtherance of peace, for the chance to gain international recognition.

This year, the Rotary International will award both an international recognition prize, which will be sponsored by Typhoo Tea and a national tier reward, supported by Westminster Stone.

This will be the third year that the International Eisteddfod will be working with Rotary International to host the prestigious award. Rotary International is one of the largest humanitarian organisations in the world and the partnership with the Eisteddfod is ideal, as the Peace Award is a logical extension to the aims and objectives of this unique event, which was established to promote peace and harmony between nations.

Shortlisted entrants will be invited to the picturesque town of Llangollen, North Wales, where the 2018 winner will receive international acknowledgment on Thursday 5th July, following an evening of international celebration for which the Llangollen Eisteddfod is renowned.

Last year’s judges were completely blown away by the inspirational initiatives presented by the 2017 nominees, deciding to reward not one but two organisations with the Rotary Prize in a joint celebration of peace during the International Eisteddfod’s 70th Anniversary Opening Concert.

British Ironworks was acknowledged for its Save a Life, Surrender Your Knife weapons amnesty project, which culminated in the creation of the National Monument Against Violence and Aggression – an Angel sculpture crafted from surrendered weapons from 43 police constabularies across the country. Also recognised at the presentation was Médecins Sans Frontières, for its policy of témoignage – speaking out to alleviate suffering and protect human life.

Chairing this year’s adjudicating panel is Richard Hazlehurst of Bradford Peace Centre, who was recognised as a peace honoree at the United Nations in 2017.

As peace initiatives take many different forms, the judging panel will consider the public benefit of the project, the profile and longevity of the organisation or individual and the impact of their work.

To enter or nominate for the Rotary International Peace Prize, please send an email to Molly Youd at myoud@talktalk.net, enclosing details of your nomination and any links to websites or any information which may support the application. Nominations must be received by the 31st May.

Past District Governor for Rotary International, Molly Youd, said: “Building on the resounding success of the last two year’s celebrations, we’re excited to once again recognise the individuals and organisations that work so tirelessly to promote peace and understanding here in the UK and worldwide.

“The initial idea of creating the Rotary International Peace Prize was born at the Llangollen Eisteddfod four years ago, when performers from Ukraine and Russia, two countries that were waging war against one another at the time, united during a spectacular dance performance in a moment of peace.

“With the festival’s message of global friendship now more relevant than ever, it’s with great joy that we’re able to bring together peace advocates during a celebration of international music and dance, for the chance to win this prestigious and significant prize.”

Former Host Area Coordinator for the Rotary Peace Centre at the University of Bradford, Richard Hazlehurst, said:  “Following the high calibre of valuable work presented to us during the 2017 award, the panel fully expect this year’s judging process to be made even more difficult.

“The Rotary Foundation motto is, simply, doing good in the world and the judges for this remarkable award by Rotary District 1180 are looking for people who are doing just that – good in the world. We will welcome nominations from or about individuals and organisations who have changed the course of history for the better, through their peaceful practices and awareness, making our world a better place to live in today.”