From Folklore to Jazz 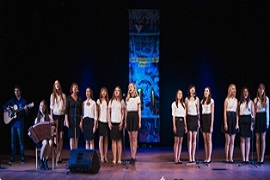 The group is about 8 years with the language students coming and going as they are studying for 4 years at the university and then leaving the city after graduation. From Folklore to Jazz has performed on the local level in the city concerts; touring the nearest countryside schools. Their highest achievement has been the third place in the regional competition of patriotic song.