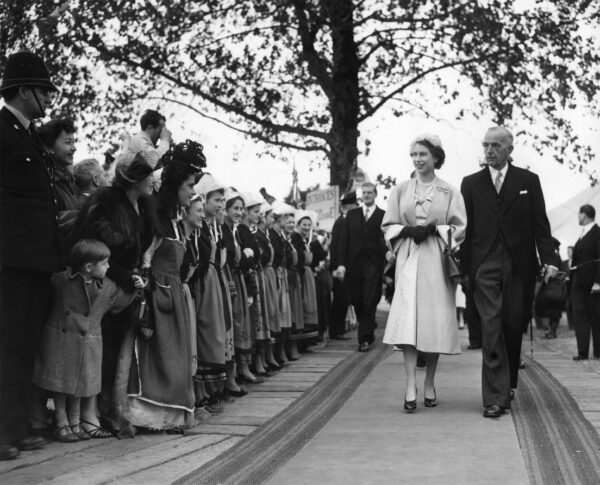 Charities often have patrons. Their role is, in the vast majority of cases, that of a “figurehead” or “flag bearer,” a leader whose example people are willing to follow and whose name can lend credibility and status to the organisation which, in turn, can increase the effectiveness of its fundraising, campaigning and public relations activities. Unlike trustees, patrons have no legal status or binding obligations. Neither do they have any responsibility for the management of the organisation or the manner in which funds are spent.
In its 75 years the Eisteddfod has had three patrons. In 1947 the position was filled by Sir Henry Morris-Jones, National Liberal MP for Denbigh, emphasising the local support for the festival in political and community circles. However, such was the success of the first event that early in 1948 Princess Elizabeth and the Duke of Edinburgh accepted the invitation to become patrons for that year. This was one of the first such responsibilities taken on by the couple; the attraction was apparently the enormous enthusiasm raised by the Eisteddfod’s promise of improving international relations by bringing ordinary people together from different countries. In 1997 their eldest son, the Prince of Wales, took on the patronage; the Eisteddfod is one of over 500 charities of which he is patron.
Queen Elizabeth II and Prince Philip visited Llangollen twice. In July 1953, as part of her post-coronation tour of North Wales, the dates of which were fixed to coincide with Eisteddfod week; other venues included Wrexham, Rhyl and Caernarvon. Then in 1992 she opened the International Pavilion, allowing the prefix “Royal” to be attached to its name. Charles came with Diana in 1985, and has been a frequent visitor since, with and without his second wife. The only other Royal visits were by Princess Margaret and Lord Snowdon (1964) and Princess Anne (1977), and Margaret on her own in 1990 for an evening concert.
The royal visit to Llangollen in 1953 lasted less than two hours on the Friday afternoon. The couple travelled by car from Wrexham, through Trevor, Cefn and Acrefair, proceeding to the Eisteddfod ground via Abbey Road and Tower Hill. Going past Bridge End, the route was lined with troops in battledress. There was a short programme on the stage, with a welcoming address by chairman Jack Rhys Robert, and the entire audience sang “En Mwyn Frenhines” conducted by Musical Director W.S Gwynn Williams. Then a massed choir comprising 1500 voices from Austria, Canada, England, France, Germany, Italy, Norway, Spain, USA and Wales performed Bach’s “All Honour, Praise and Blessing”. A bouquet was presented by the chairman’s daughter, Nêst; she remembers being miffed by the absence of a crown and a horse-drawn gilded carriage. The Queen walked around the field with the Chairman, and then drove to the station.
1953 was a truly memorable year for the Eisteddfod. In addition to Elizabeth II, Dylan Thomas visited and a week or so later delivered a lyrical radio broadcast describing a poet’s emotional response to what he saw and heard. It was the largest Eisteddfod to date, and the competitors came in their thousands, 150 choirs from 20 countries. They included the Obernkirchen Childrens Choir from West Germany, captured by Dylan Thomas as “pigtailed angels”: their performance of “Mein Vater war ein Wandersmann” was recorded by the BBC, subsequently popularised on the Light Programme, and early in 1954 turned by Parlophone into the global English language hit “The Happy Wanderer”.
The 1992 royal visit completed a major project for the Eisteddfod, the opening of a building aimed at providing a permanent home; there had been a wish even since 1947 that the festival might generate a centre for the Performing Arts in Llangollen. The Pavilion was designed, built. owned and managed by Clwyd County Council, with financial support from the Welsh Office and the European Communities; it would be made available each year for the Eisteddfod. Hosted by Chairman Dudley Richards, the Queen’s short programme for the day included Rebecca Evans (Young Welsh Singer of 1991) and a massed chamber choir from Denmark, England, Italy, Lithuania, Philippines, USA and Wales singing “Let all men praise the Lord” (Mendelssohn).
The visits were initially very formal occasions, rigidly scripted and planned; the formality has declined over the years, though even as late as 1977 it was still necessary for the organisers of Princess Anne’s visit to remind “ladies” of the protocol for wearing gloves. Diana in 1985 brought a fresh note, accepting on the couple’s walkabout the gift of a bouquet of marigolds offered by two young girl visitors, and carrying it for the whole afternoon. Charles’ subsequent visits have included a special concert to support the Prince’s Trust. They are most noted for his enthusiastic dances with competitors, especially Indians.
© Chris Adams 2022