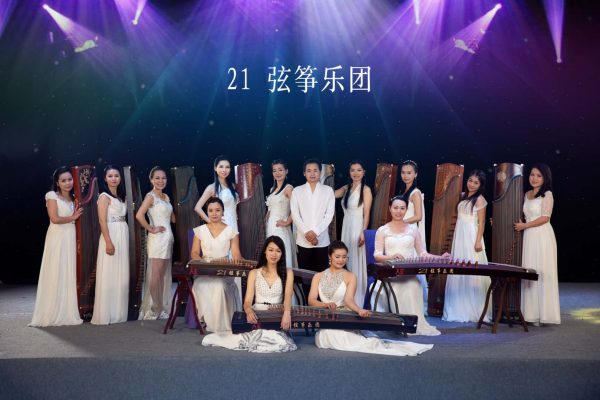 Biography: The 21-string Guzheng Ensemble was created by the famous young Guzheng performer Yuyan Xu, who was also an United States Confucius Music competition judge. The Ensemble includes a teacher’s and a children’s team. The choir members of the teachers ‘ team are outstanding young Guzheng teachers who have graduated from the Department of Music Performance, while the children’s group are a combination of outstanding Guzheng students between the ages of 6 to 16 years old.

The Ensemble incorporate with traditional Chinese Guzheng instruments and world music, and is  committed to the promotion of Guzheng art and aesthetics. The Ensemble’s name is inspired by the Modern Universal Cheng’s 21 strings, as well as to the music. As its name implies, the Ensemble has committed to return the instrument to its pure light musical style.

As the Head of the Ensemble, Yuyan Xu, has combined Classical Chinese and foreign music which is very popular with their audience.

The Ensemble, was invited to participate at the Llangollen Eisteddfod Opening concert in the UK in 2015 and won the championship in the music competition. They were complimented by HRH Prince Charles who personally interviewed the ensemble. The ensemble were also interviewed,  which was broadcasted on local as well as national radio and television stations.