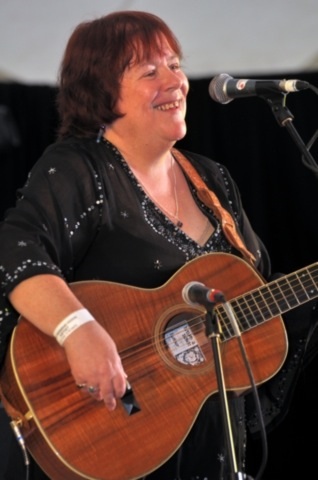 Biography: Anne Lister has been writing songs and singing for many years. She initially worked in London, has lived in Lyon, France, before returning to live in London again, and her songs began to attract the attention of other singers, most notably Nic Jones.

She was Reviews Editor for Karl Dallas’ “Acoustic Music” magazine and in 1984 met Martin Simpson and Mary McLaughlin at the Broadstairs folk festival. Martin was by then already singing Anne’s song “Icarus”, which he had learned from Maggie Holland, and soon afterwards started singing “Moth”. Anne and Mary formed the duo Anonyma, and toured together throughout the UK and the US for five years as well as recording “Burnt Feathers” for the Fellside label, which was produced by Martin.

Anne has mainly worked solo since then but has toured with instrumentalist Steafan Hannigan, and in recent years has toured twice again in the UK with Mary McLaughlin. She has released seven solo albums, as well as a live album, and has continued to perform widely in the UK and the US. She runs workshops on songwriting, storytelling, voice and creativity and her first novel, “Slipping through the Cracks” is available on Amazon.

In 2002 she moved back home to Wales, and is currently engaged in working on a PhD thesis at Cardiff University’s School of Wales. This research has led Anne into new performing challenges, which in 2017 have included storytelling at the International Medieval Congress in Leeds and the International Arthurian Society in Germany. A new album is also in progress, which will include some recently rediscovered recordings as well as some new songs.