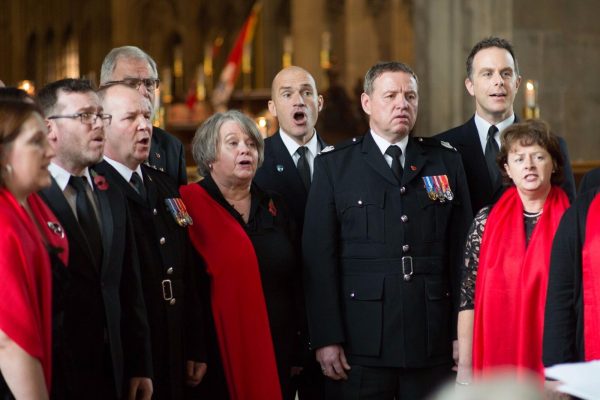 Biography: Members of the Cheshire Fire and Rescue Service choir were auditioned by Gareth Malone in 2013. Following the BBC 2 second series of The Choir: Sing While You Work, in which they reached the final, their choir has stayed together under the guidance of Musical Director Ruairi Edwards and Accompanist Wendy Dolby.

The members are drawn from across the Service with the choir made up of firefighters, fire authority, support staff, youth workers and volunteers. Last year the Fire Choir has performed at The Spirit of Fire Awards in London, Bollington Festival, Bollington in Cheshire, The LGA Fire Conference, Millennium Stadium in Cardiff, Love Music Trust, Bridgewater Hall in Manchester and at WWI Commemoration event at Tatton Park in Cheshire.

Performing the Bruce Springsteen’s song ‘’The Rising’’ is Cheshire Fire Choir’s way of never forgetting colleagues and a means of raising money for The Fire Fighters Charity. The song holds a special meaning for every single member of the choir, comprising firefighters, control and support staff from Cheshire Fire and Rescue Service, as it was written on the 15th anniversary of the 9/11 attacks on the Twin Towers when 343 firefighters, 60 police officers and 8 paramedics lost their lives. It is also a tribute to emergency services personnel in the UK who have given their lives in the line of duty.