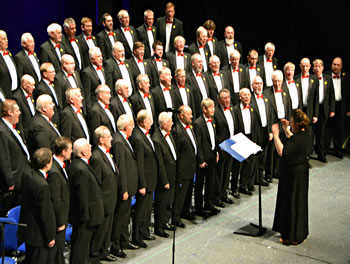 Biography: In 1946 the people of Llangollen, as a gesture to International Peace, decided to ask former enemies, to come together in the friendly competitive atmosphere of a traditional Welsh Eisteddfod. The village of Froncysyllte, just 4 miles from Llangollen decided that the Eisteddfod was a good idea, and a public meeting was called, with the formation of a choir top of their agenda.

The Froncysyllte Male Voice Choir was therefore born and went on to compete at the Eisteddfod the following year. The Choristers continue to this day in their 70th year and are now an adult male voice choir of all ages and abilities and an International reputation.

They perform throughout the year in a variety of concerts and locations both abroad and in the United Kingdom. The choir are a fun loving group that thrive off the happiness their music gives to thousands all over the world. Friendships are formed not only in the choir but between their wives and partners that last a lifetime.

The Choir has had success in the National Eisteddfod of Wales and the Llangollen International Musical Eisteddfod. Their most recent success was at the Cornwall international Choral Festival in April 2017 where they took three prizes for best UK Choir, best performance of a piece, and first place in the 40+ voices.