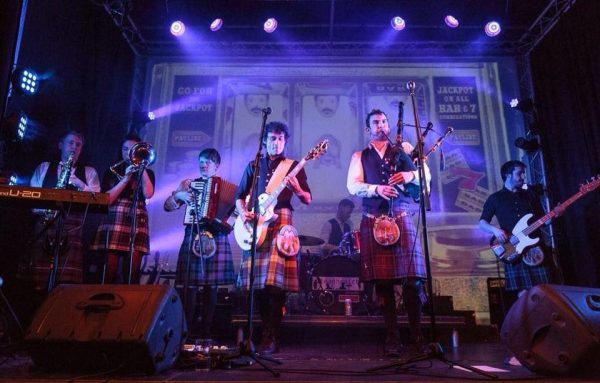 Biography: Gleadhraich are a Celtic Rock Band formed in Carnoustie, Angus in 2010. The band is made up of Craig Weir (Bagpipes/ Vocals), Ross White (Guitar/ Vocals), Paul Weir (Percussion) and Graeme Ritchie (Bass Guitar) with a live addition of a backing band which includes saxophone, trombone, accordion, keyboard and fiddle. Gleadhraich released their debut EP, ‘Pipe Dreams’ in 2014 which was quickly followed up by the Glasgow 2014 Single, ‘Skirling Ska’. The follow up to ‘Pipe Dreams’, ‘Where We’re From’ was released in March 2015 to critical acclaim. At a Dundee performance in 2016 Gleadhraich welcomed Britain’s Got Talent winner, Jai McDowall and Bay City Roller’s onstage to play with the band as special guests. The band has performed at a variety of events across the UK from headline shows to festival performances. This has led to the band sharing stages with acts such as Skerryvore, Donnie Munro, Twin Atlantic, AC/DC The Fratellis and Peatbog Faeries.

Gleadhraich made their US debut during New York Tartan Week in 2017 with an appearance at the prestigious BB King’s Blues Bar and Grill at the Post-Parade Party. Gleadhraich have further performances lined up across the UK, Lithuania, Netherlands, Switzerland and the USA. The band has featured on many national media platforms such as BBC, STV, S4C, NME, Magic FM and many more.