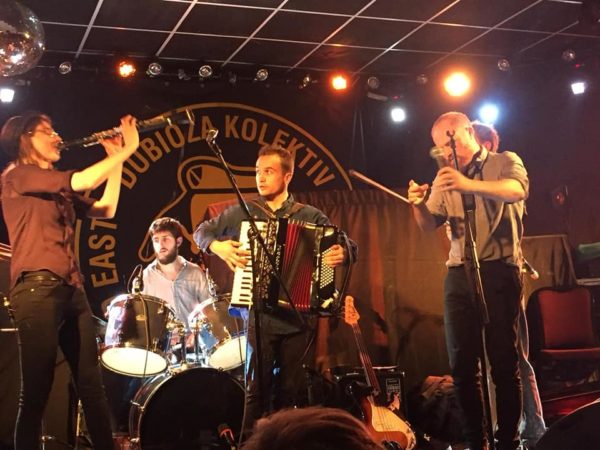 Kibitz are a 6 piece band from Leeds performing energetic and soulful music taking inspiration from the haunting melodies of traditional Eastern European and Klezmer tunes, tinged with gypsy jazz improv and driven by pulsating Balkan beats. Their music transcends genres, seamlessly blending frenzied Romanian and Turkish dance tunes with heart wrenching Ukrainian and Macedonian epics, always keeping the audience spellbound and dancing like there’s no tomorrow. Their flexible line up means they can accommodate almost any venue or event.

Kibitz perform shows and workshops regularly at festivals (including performing at Latitude 2018, Northern Green Gathering 2018, Hive Festival 2017 and 2018, Carlisle Fringe Festival 2018 and Halifax Beer and Gin Festival 2018) and running workshops at WOMAD festival and St Andrew University. They regularly perform at weddings and private/ corporate functions (such as Alton Towers).

Highlights of 2018 included performing on 3 consecutive nights at Latitude Festival on the Dash arts Euro-Squat stage, performing on the main stage at Northern Green Gathering (Derbyshire) and being featured and performing at the preview of the BBC documentary “A Very British History: The Jews of Leeds”. They also performed with ‘Tantz’ at Balkanarama and supported ‘The Ukranians’ at Muzikantes Festival 2018. In November 2018 they also supported the Dubioza Kolektiv at The Brudenell Social Club (Leeds).

The band’s debut CD was featured on BBC Introducing and has been lovingly received by the folk and alternative communities alike. Kibitz are currently recording their next album exploring original compositions due to be released early 2019.