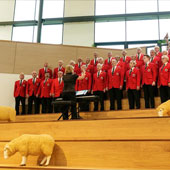 The village of Brymbo is no stranger to male voice choirs with a tradition of this beloved music – making stretching back over 100 years.

Local musician, Mr Glyn Hughes, was appointed Conductor in 1966 and the musical world opened up to the choir with subsequent performances throughout Great Britain, tours to America and Europe, television appearances and several audio recordings.