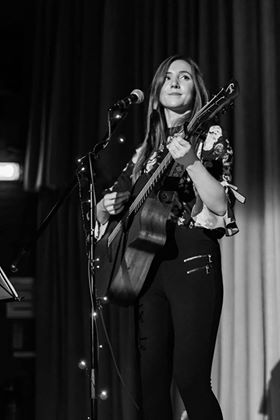 Biography: Raised on Aretha Franklin, Fleetwood Mac and a single Eagles cassette (played on repeat to drown out next door’s TV), Lucy taught herself to play while at university. In 2013 she began playing at open mics, before turning her hand to writing. Inspired by most genres, her influences include John Martyn, Sandy Denny, Lisa Hannigan, Eva Cassidy, Laura Marling and the Black Keys. These influences can be heard in her own alt blues, acoustic folk songs, from poignant yet empowering lyrics to distinct chord progressions and memorable choruses.

2017 saw festival performances at Latitude, Folk on the Dock, Llangollen (on the same bill as Razorlight), Smoked and Uncut, Gorjys Secrets, The International Guitar Festival of Great Britain, Chester Racecourse, Hawkeshead Brewery, London Rd Brewhouse, Chester Live and many more around the UK.

So far in 2018, Lucy has played a Sofar Sounds show in Southampton, a sold-out gig at The Big Room Heswall, performed on Radio City and BBC Radio Merseyside, and is currently recording her debut EP.