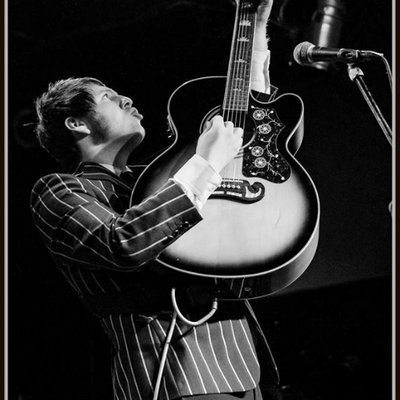 Biography: Luke Gallagher is a Wrexham based singer/songwriter who proudly wears his musical influence and his home town roots firmly on his parka sleeve. His musical goal has never been to reinvent the wheel, only keep the fires burning on the dreams his idols set out to achieve before him. This he achieves by bringing an eclectic blend of sound to a modern day audience.

Audiences have commented many times how the sound can conjure fond memories of the 90s with likenesses of Ocean Colour Scene one moment and then transport them back in musical time to a sweaty, crowded Cavern Club with his infectious Merseybeat element that wouldn’t be out of place in a Lennon/McCartney back catalogue.

A well-rehearsed act and no stranger to the stage, Gallagher has released two albums that received amazing acclaim and has completed numerous tours of the UK. No stone has been left unturned on his journey and has had the honour of playing the legendary Cavern Club many, many times during his six year career.

Not one to rest on his laurels, Gallagher is preparing to release his third album in the summer of 2018 and work has already begun on album number four. An ambition from the start was to work with his heroes, Luke managed to proudly tick off many names that adorn his record collection. Names such as Ocean Colour Scene, Steve Craddock, Mark Morriss, Tom Hingley, The Christians, Bruce Foxton, The Real People and Billy Bibby to name a few. He’s had the pleasure of playing many festivals, sharing the bill with names ranging from The Buzzcocks to the Hoosiers.