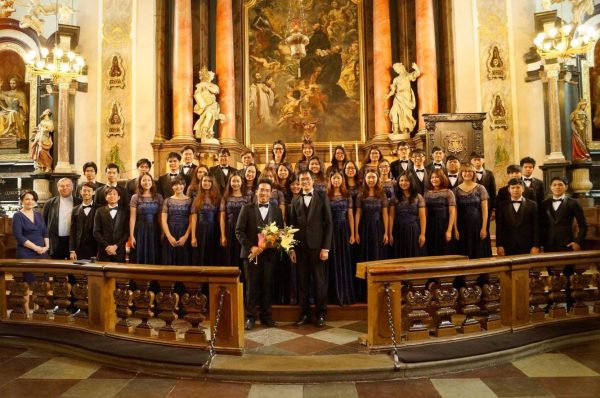 Biography: The Mahidol Univesity choir, also known as MU Choir, was founded in July 2011 by the Dean of the college of music- associate professor Dr. Sugree Charoensook. It is the University’s premiere mixed choir, composed of a select group of students representing the different colleges and faculties of Mahidol University, conducted by Rit Subsomboon.

Since its establishment, the choir actively performs for important academic and cultural events held by the university. The choir has shown a good progress since it was established, for example, they have participated in many prestigious choral festivals in Europe and Asia such as Russia, Slovakia, Poland, Lithuania, Germany, Czech Republic, Macau and China. The choir has also performed with Thailand Philharmonic Orchestra in large-scale choral works, Mahler’s Symphony No.2, 3, Carl Orff’s Carmina Burana, Beethoven’s Choral Fantasy, Beethoven’s Symphony No.9, Mozart’s Requiem, Faure’s Requiem, Verdi Requiem and many others. Some other successes of the choir were in 2016 when they got two silver medals for the mixed youth choir category and acapella category from Slovakia Cantat. And in 2016 when they won gold medals in mixed youth choir category and gospel category from Kaunas Cantat.

They have an exceptional choral repertoire which covers different musical styles, hopefully paving the way for future success in local and international stages.