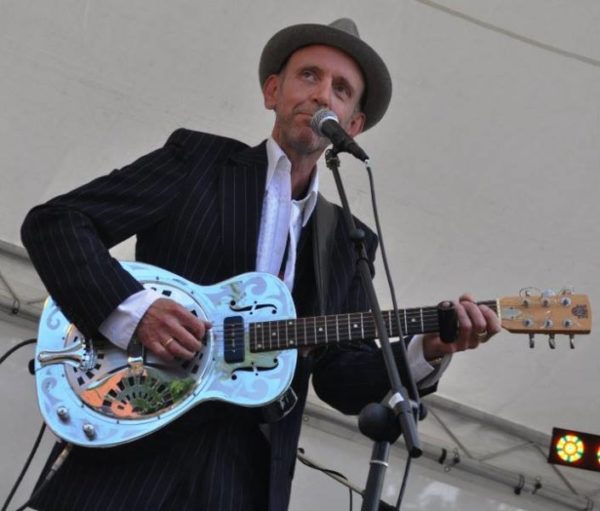 Mark Flanagan is probably best known as guitarist for Jools Holland’s Rhythm and Blues Orchestra, an association that began in 1988 and continues to this day.

Over the years with the Rhythm and Blues Orchestra, Mark has performed with many of the biggest names in the industry – Eric Clapton, Tom Jones, Paul Weller, Amy Winehouse, BB King, Al Green to name but a few. As well as appearing on all Jools’ award-winning albums, Mark also played acoustic lead guitar on Devil and the Deep Blue Sea a track on George Harrison’s last album Brainwashed.

Mark continues to make a name for himself as a solo artist with his own catalogue of songs, written on Dobro and acoustic guitars. Performing solo, or with a small band, Mark wows his audiences with fine guitar playing and songs written from the heart. You might catch him doing a support slot at Jools Holland’s shows around the UK, or at his own gigs in arts centres or small theatres and festivals around the country.

Down The Wire, Mark’s second album, was co-written and performed with old friend Jimmy Bergin. This record is alt/country in flavour, romantically inclined, and features a stunning guest vocal appearance by Ruby Turner.

Back to the Stars is the latest recording of 5 songs featuring, amongst others, the members of Mark Flanagan Trio – George Double (drums) and Adam Double (bass).