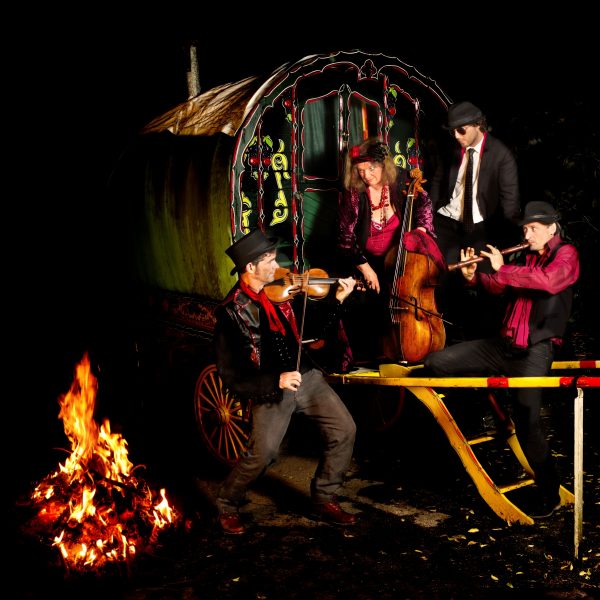 Red Priest’s CD ‘The Baroque Bohemians’ reached No.1 in the UK Classical Specialist Chart and is the only early music group in the world to have been compared in the press to the Rolling Stones, 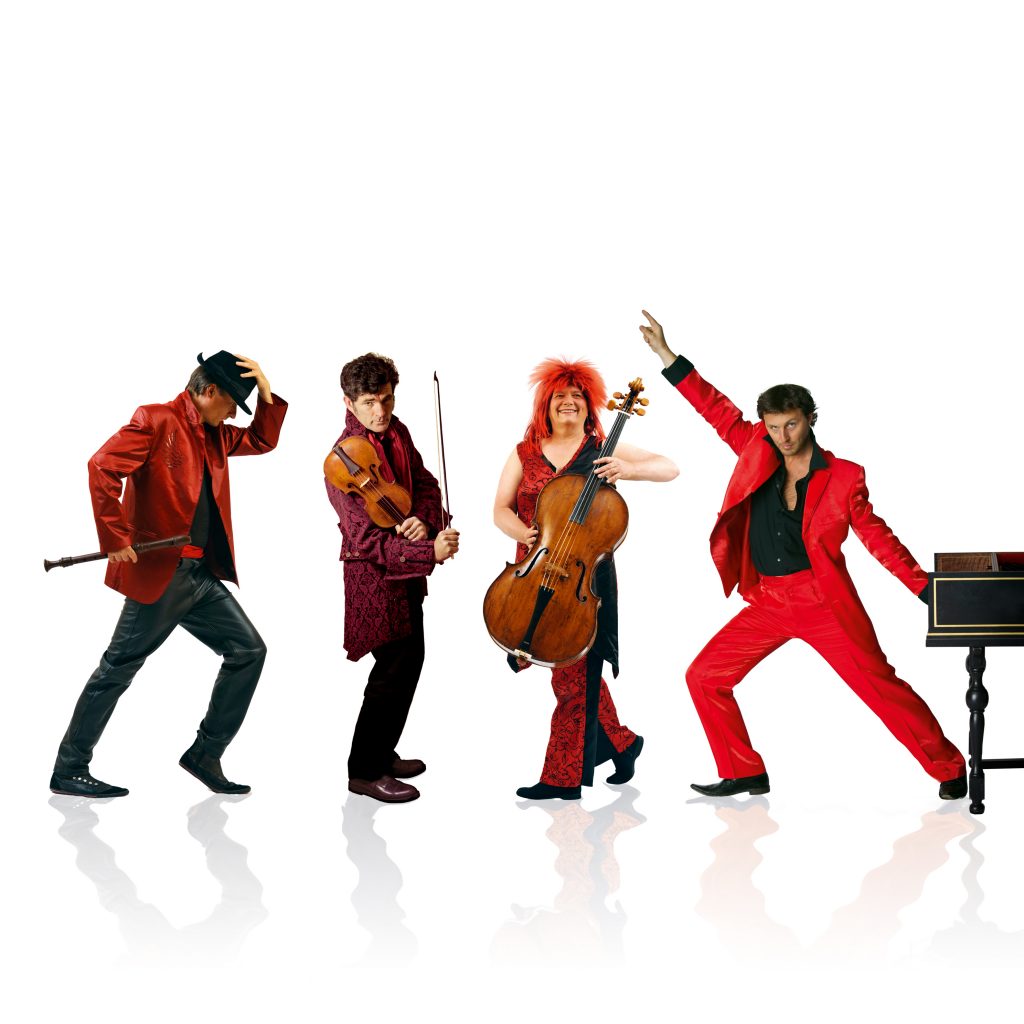 Jackson Pollock, the Marx Brothers, Spike Jones and the Cirque du Soleil. This extraordinary acoustic foursome has been described by music critics as “visionary and heretical,” “outrageous yet compulsive,” “wholly irreverent and highly enlightened,” “completely wild and deeply imaginative,” with a “red-hot wicked sense of humour” and a “break-all-rules, rock-chamber concert approach to early music.”

Founded in 1997, and named after the flame-haired priest, Antonio Vivaldi, Red Priest has given several hundred sell-out concerts in many of the world’s most prestigious festivals, including the Hong Kong Arts Festival, Moscow December Nights Festival, Schwetzingen Festival, Prague Spring Festival, Ravinia Festival, Bermuda Festival, and in most European countries, Japan, Australia, and throughout North and Central America. The group has been the subject of hour-long TV profiles for NHK (Japan) and ITV (UK) – the latter for the prestigious South Bank Show in 2005, which documented the launch of the Red Hot Baroque Show, an electrifying marriage of old music with the latest light and video technology. 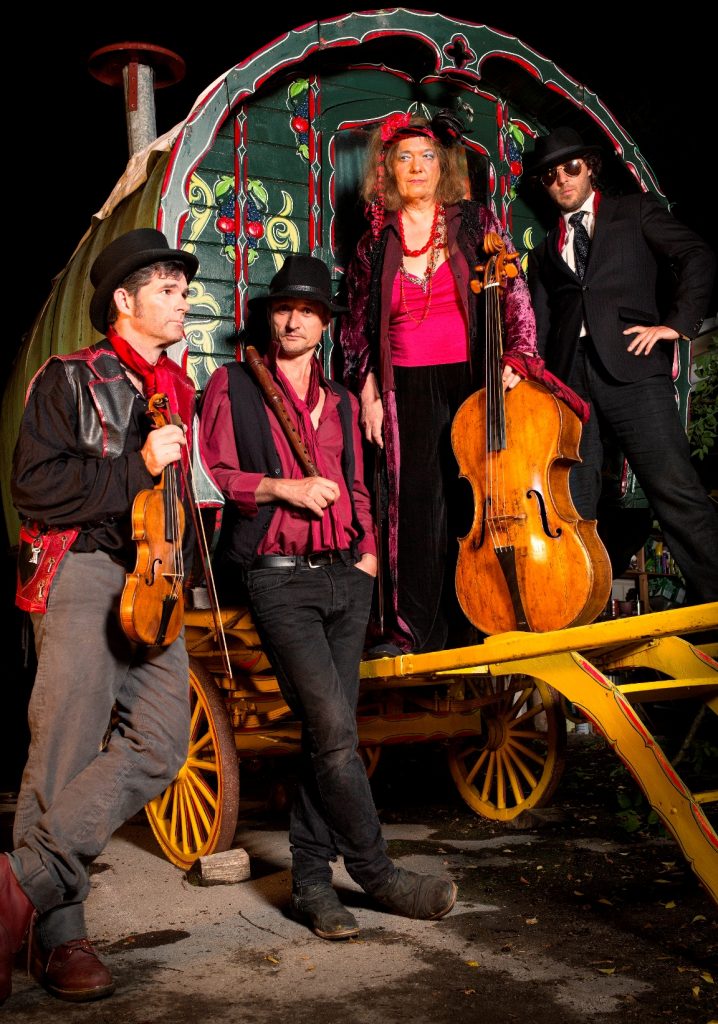 In 2008 Red Priest launched its own record label, Red Priest Recordings, which is now the home for all of the recordings of the ensemble and its members, and has attracted much attention in the music press worldwide.  Gramophone said of the  group’s Handel in the Wind’ CD – ‘…quite brilliant…. some of the most extraordinary instrumental playing you’re likely to hear.’ Other releases have included a swashbuckling collection entitled “Pirates of the Baroque” and the group’s all-Bach blockbuster, “Johann, I’m Only Dancing.”

Piers Adams has been heralded in the Washington Post as ‘the reigning recorder virtuoso in the world today’.   He has performed in numerous festivals and at premiere concert halls throughout the world, including London’s Royal Festival, Wigmore and Queen Elizabeth Halls, and as concerto soloist with the Philharmonia, the Academy of Ancient Music, the Singapore Symphony and the BBC Symphony. Piers has made several solo CDs reflecting an eclectic taste, ranging from his award-winning Vivaldi début disc to David Bedford’s Recorder Concerto – one of many major works written for and premiered by him. He has also researched, arranged and recorded many classical, romantic, impressionist and folk-influenced showpieces, which are a mainstay of his recital programs.

Adam Summerhayes’s grandfather studied the violin with Joachim’s last pupil and with Adolf Brodsky, the violinist who premiered the Tchaikovsky concerto. He learnt first from him and then from Yfrah Neaman, one of the twentieth century’s greatest pedagogues. He was introduced to the Baroque violin by Roy Goodman in the 1980s, initiated into period instrument performance by Paul McCreesh and studied with Micaela Comberti, then at the forefront of the early music scene.

He has been very highly acclaimed as a chamber musician, particularly for a number of discs featuring first recordings of previously unknown repertoire, including works by Aaron Copland.  He has also given many concerto performances in Europe, Russia and the USA. Adam has recorded over 20 CDs for Harmonia Mundi, Chandos, ASV, Meridian, Sargasso and others. A disc of his gypsy fiddle playing, was described as “heady stuff … thrilling virtuoso playing” (Gramophone). This disc lead to a cameo film moment, in Guy Ritchie’s blockbuster Sherlock Holmes: A Game of Shadows in which a performance of one of his own tracks is also featured.

Adam has broadcast live for BBC Radio 3 – including on the Early Music Show – and his recordings and compositions have been broadcast throughout the world.

Angela East is widely respected as one of the most brilliant and dynamic performers in the period instrument world, praised in The Times, London, for the “elemental power” of her cello playing. She has given numerous concerto performances in London’s Queen Elizabeth and Wigmore Halls, and has performed as soloist and continuo cellist with many of Europe’s leading baroque orchestras, as well as with her own ensemble, the Revolutionary Drawing Room. Among her impressive list of concert credits are La Scala, Milan, Sydney Opera House, Versailles and Glyndebourne.   Her disc of Bach’s Cello Suites was released on Red Priest Recordings, together with a recital disc of popular baroque cello sonatas.

David Wright was an almost entirely self-taught musician before gaining a scholarship to the Royal College of Music, where he won several prizes, including the International Broadwood Competition, and graduated with distinction. Since then he has worked with some of the world’s leading musicians including Emma Kirkby, James Bowman and Steven Varcoe, and as a soloist with many groups of international renown. He has directed numerous concerts from the harpsichord, including the first modern performance of Arne’s The Blind Beggar of Bethnal Green, and is guest conductor to several European orchestras. Much of David’s time in recent years has been devoted to performing Bach’s Goldberg Variations, which he recorded in 2007 and has since toured extensively, and performed on TV and radio.   He joined Red Priest in 2011, taking over from his predecessor in a Dr. Who style regeneration event in Brighton Early Music Festival in 2010!