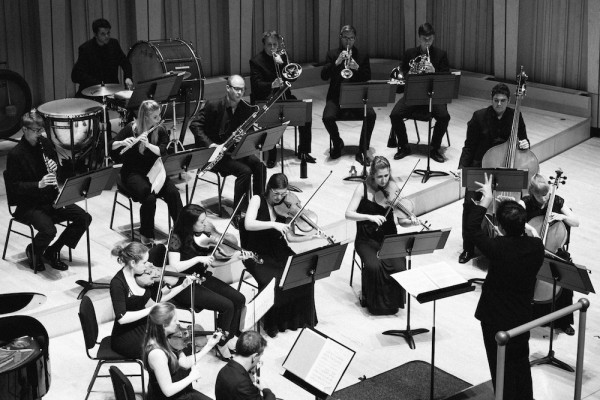 Sinfonia Cymru is an exciting and progressive chamber orchestra from Wales. The orchestra is made up of musicians in the early stages of their careers and is the first and only orchestra of its kind to be revenue-funded by the Arts Council of Wales.

Sinfonia Cymru works in partnership with The Royal Welsh College of Music and Drama (RWCMD) through the Professional Pathway Bursary scheme and regular performances at The Dora Stoutzker Hall. Sinfonia Cymru is also resident orchestra at The Riverfront, Newport and performs in venues across Wales.

The orchestra works with Young Classical Artists Trust to create opportunities for the next generation of solo artists including the orchestra’s current Leader/Director Bartosz Woroch. Sinfonia Cymru has worked with a number of celebrated guest artists including Bryn Terfel, Llŷr Williams, Paul Watkins, Carlo Rizzi, and Alina Ibragimova.

The orchestra enjoys a long-standing relationship with Deutsche-Gramophon harpist Catrin Finch. Past projects with Catrin include Classic BRIT nominated album ‘Blessing’ with John Rutter, which reached number one in BBC Radio 3’s classical chart, and a performance at Universal Live ‘Yellow Lounge’.

In 2013 Sinfonia Cymru embarked on a major project to develop and launch a new way of working for chamber orchestras. With funding from Paul Hamlyn Foundation, the orchestra established Curate; a collective of orchestral musicians, administrators and other young creatives who come together to express their artistic ideas and develop their own projects. Over the last 3 years, Curate has developed the flagship UnButtoned and Unease events in collaboration with BAFTA-Cymru winning musician Tom Raybould, the orchestra’s classical pub gig ‘Quartet’ with Fizzi Events, and a live Silent Film event at Chapter Arts Centre.

2014 was Sinfonia Cymru’s busiest year, performing 44 concerts to over 13,000 people and working with actor Richard Harrington (star of S4C Y Gwyll / Hinterland), harpist Catrin Finch alongside young conductor Ben Gernon, world-renowned baritone Bryn Terfel, and on an experimental collaboration with theatre director Tom Morris at The Bristol Proms. The orchestra also played a major role in the ‘Emerging Classical Talent in the EU’ project; an International collaboration that brought together a number of European partners and culminated in Sinfonia Cymru’s Small Nations Big Sounds Festival, which it delivered in partnership with RWCMD.

In 2015, Sinfonia Cymru will perform with BBC Young Musician winner Laura Van der Heijden and with period violinist Rachel Podger on the orchestra’s first all-baroque concert in May. After recently relaunching its Education & Community Programme, the orchestra will also work in partnership with Mid Wales Music Trust and Arts Connection to deliver an education project for school children in Powys based on Saint-Saëns Carnival of the Animals throughout the year.

More recently in 2015, Sinfonia Cymru performed to record audiences across Wales with BBC Young Musician winner Laura Van der Heijden and collaborated with Ballet Cymru, Cerys Matthews and Catrin Finch on TIR/Celtic Concerto. In May the orchestra also engaged period violinist Rachel Podger for the first time in a programme of all-baroque works and returned to The Bristol Proms in July for a special performance with Norwegian duo Mari and Hakon Samuelsen. Since relaunching its Education & Community Programme earlier this year the orchestra has worked with over 1,500 primary school children in Mid Wales in a project based on Carnival of the Animals, performed in care homes and community hospitals across Flintshire and partnered with The Bristol Proms on The Gift of Music, a unique education project that saw our musicians working with over 1,600 school children in Bristol.

Sinfonia Cymru looks forward to performing alongside Bryn Terfel, Sting, Rebecca Evans, Catrin Finch, Hannah Stone and Only Men Aloud at the Royal Albert Hall later in October to celebrate Bryn Terfel’s 50th Birthday in a special concert that will be recorded by Sky Arts.