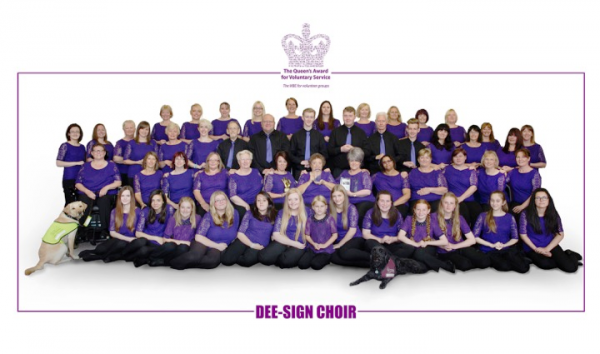 Biography: The Dee-Sign Choir was formed in 1997 in order to raise much needed funds for Chester Deaf Centre, and over the last 20 years they have raised close to £200,000.
They are a mixed group of people from age 8 to 75, all fund-raising volunteers, some profoundly deaf, some hard of hearing, some hearing and some with disabilities –who all love music and the extra joy they get from performing. In 2012 they were awarded with The Queen’s Award for Voluntary Service.  In 2010, 2011 and 2015 the choir competed in The Jersey Eisteddfod winning on each occasion.  In 2017 Gt.Britain followed Jersey by holding the first Signing Choirs competition in Nottingham – Dee-Sign were up against 9 other choirs, but came away the winners receiving the Morgan Astill Trophy. Also in 2017 the Choir and the Chester Deaf Club members held an Anniversary Celebration Night when the Deaf Club celebrated 40 years and the Choir 20 years. They have attended Llangollen Eisteddfod three times before and for them it is an event not to be missed.