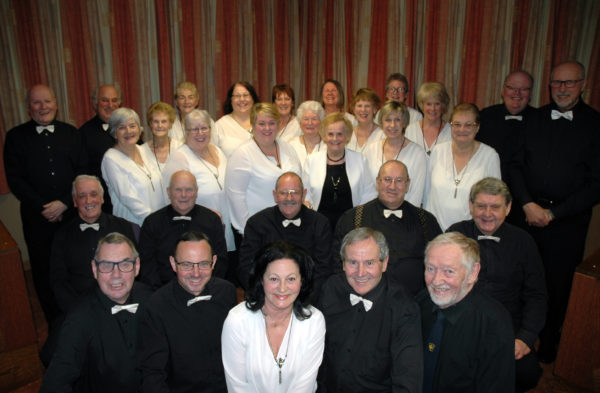 Biography:  The choir began in 1955, formed by the distinguished musician the late Emyr James of Rhosllanerchrugog. Later it was joined by local musician the late Don Lambert and in the mid 1970s it became known as The James Lambert Singers. Emyr James retired as musical director in 1990 when the present director, Mair Evans, took over from him. Mair is an accomplished musician, a music teacher, and a former accompanist for the award winning Froncysyllte Male Voice Choir. She is a founder member of The James Lambert Singers.

Emyr James introduced a new distinctive sound to choral singing in North Wales, breaking away from the more traditional form of music, and developed a more relaxed and ‘easy listening’ repertoire. Mair Evans has successfully continued with this style of music.

Apart from singing at home, the choir has frequently performed abroad and has visited Germany, Malta, Switzerland, Tenerife, Cyprus, USA, and Ireland. Today the choir of about 30 mixed voices has a wide repertoire of English and Welsh light music, including songs from yesteryear – from the 1940s through to the well known popular songs of today. Welsh folk songs are included as well as traditional and modern carols. The singing is to a pre-recorded accompaniment and practices are held every Tuesday evening at 7.30pm at the Brymbo Sports and Leisure Club.

The James Lambert Singers have recorded a number of CD albums, the latest of which is entitled ‘Together In Song’. The choir is available for concerts, cabaret, weddings, anniversaries, after dinner entertainment, charity events, and other occasions.