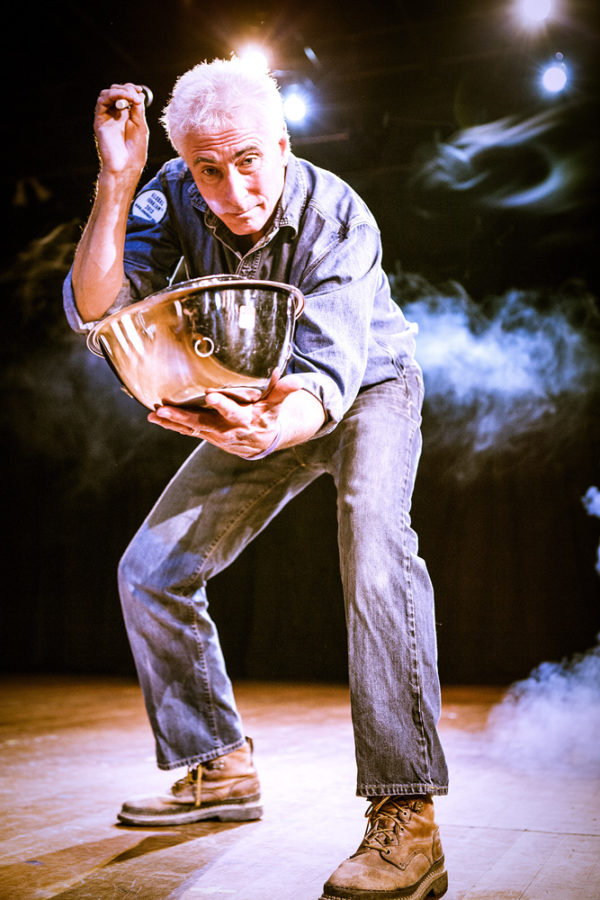 Biography: As a graduate of the Manhattan School of Music and a member of the illustrious Louisville Orchestra and Buffalo Philharmonic, percussionist & composer, Donald Knaack, is not the sort of man you’d envision wearing a blue denim work shirt, replete with glittering recycling logo, while pounding out hypnotic rhythms on hubcaps, saw blades, and buckets.

Yet, that’s what Donald Knaack, better known as The Junkman™, does every time he takes the stage.

Inspired by the sounds his mechanic father made while working in the garage, The Junkman™ developed a music based upon the sounds of found objects, finding encouragement and direction from his mentor and collaborator, the legendary John Cage. Before long, and long before the green movement even existed, The Junkman™ was playing exclusively on recycled materials, composing a new style of music forged by their unique timbres, and guided by the artistic mantra, “tools that are no good require more skill”

Junk Music™ had been born.

Just as The Junkman™ teaches us to be kind to Mother Earth and each other, Junk Music™ has been very kind to the Grammy-nominated Junkman™. Junk Music™ has been performed at classical, rock, new age, eco, future, opera, world, jazz and street events & venues worldwide, at stadiums with the likes of Eminem, Blink 182, The Black Eyed Peas, in television commercials for ESPN, The NBA, Electronic Arts and Paddle to Live, in commissions for Twyla Tharp Dance, The Kennedy Center, American Dance Festival and American Ballet Theatre, and across all mediums, includingLate Night with Conan O’Brien, CBS Sunday Morning, CBS News, National Public Radio, the BBC, Associated Press, and Billboard Magazine.

In the schools, Junk Music™ allowed Knacck to develop a music/environmental education methodology for teaching basic music rhythm, meter, and timely eco-messages simultaneously. This program empowers students to make small, habit-changing steps that lead to huge, planet-changing steps for Mother Earth. This is a part of his HOP (Help Our Planet) environmental education program, which has won awards of excellence from the Governor of Vermont, the Federal Republic of Mexico, and the United Nations.

Today, in an era where the concepts of tolerance, ethics, and inclusiveness are, once again, at risk, it has become essential to teach a new, holistic environmental message which, in addition to the protection of our air, soil and water, now includes respect for ourselves and others, confidence, kindness, teamwork, and anti-bullying.

Currently, The Junkman™’s creative efforts lie mainly in opera and theatre, wherein the principles of Junk Music™ and its Holistic environmental messages mingle with the addition of new technologies, mixed media, and cross-cultural platforms to produce innovative and enlightened “edutainment” for all.

The Junkman™ celebrates Earth Day every year with a Global Junkjam™ with students and musicians all over the world through Google Plus Hangouts.