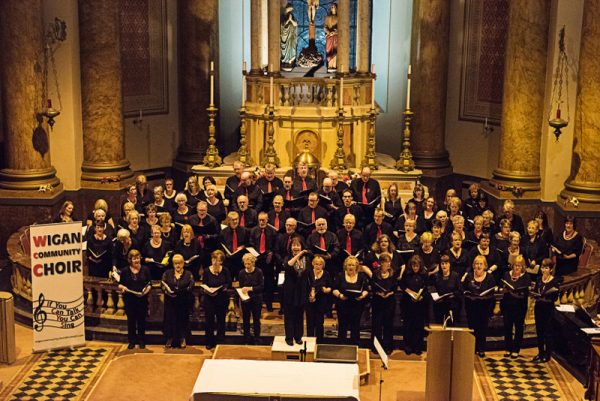 The choir is made up of all ages and musical abilities. Under the leadership of their Musical Director, Imelda Shirley they tackle a variety of songs and musical styles from Mozart to the Beatles, taking in a mixture of jazz, blues, gospel, folk and foreign language songs sung both acappella, accompanied and in four part harmony.

The choir holds summer and Christmas concerts in support of local charities and performs regularly at events in the North West including concerts in residential homes, which is an important part of their programme for the year as a ‘community’ choir.

They have performed at Salford Cathedral, in various community festivals and at the Royal Northern College of Music. In 2014 the choir visited Angers and performed with the orchestra and choir of the University. Last year they were thrilled to be chosen to sing at the Llangollen International Eisteddfod and this year they are equally thrilled to be chosen again! Recently they held a joint concert with the Mastersingers, a very well established choir who perform and record frequently all over the country.

They are now preparing for another concert with the Wigan Youth Jazz Orchestra and other choirs, which will be followed by Llangollen and their usual Christmas event.