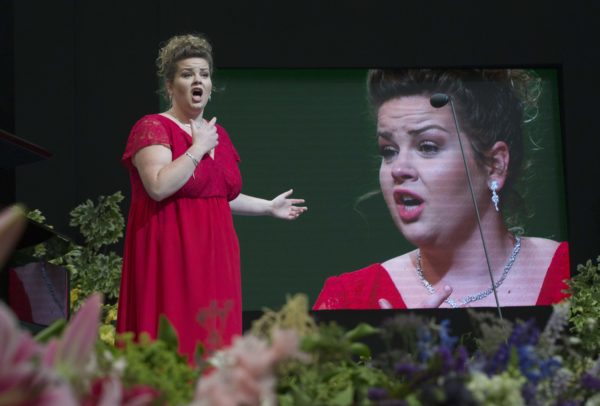 A ‘uniquely talented’ young soprano won one of the main prizes at an international festival – just a few hours after tending the sheep on the family farm.

Erin Rossington, 23, from Llanfairtalhaiarn near Abergele, was crowned as the Pendine International Voice of the Future at the Llangollen International Musical Eisteddfod.

She was presented with the Pendine Trophy, a solid silver salver, and a cheque for £5,000 by Eisteddfod president Terry Waite on behalf of Mario Kreft, proprietor of the arts loving sponsor, the Pendine Park care organisation.

In what judges acknowledge was a very close competition Erin clinched the title just ahead of Pembrokeshire soprano Jessica Cale, 27, who received the runner-up prize of £2,000.

The international competition began with a preliminary competition, with the two finalists making it onto the main Llangollen pavilion stage for the culmination of the contest.

Mr Kreft and his wife, Gill, pledged to contribute £5,000 to the International Voice of the Future competition through their Pendine Arts and Community Trust (PACT) which supports cultural and community initiatives, with the balance coming from the Sir Bryn Terfel Foundation and the Eisteddfod.

An overwhelmed and thrilled Erin said she would be using the prize money to further her dream as a career as a professional opera singer.

She said: “It was a wonderful feeling to win such a prestigious competition and I can’t believe that I’ve come this far.”

Erin, who was helping out on her family’s sheep farm just the day before the competition preliminaries, has been a passionate singer since she was very small and has competed at eisteddfods right across Wales and even abroad.

In 2013 she was part of a group from the Urdd Eisteddfod which journeyed to the Welsh settlement in Argentina’s Patagonia region to compete in its own eisteddfod, proudly taking second place.

Four years ago she played innkeeper’s wife Madame Thenardier in an Urdd production of Les Miserables in Cardiff.

Erin has been studying at the Royal Northern College of Music in Manchester and has just graduated with a Masters of Music Degree at the Guild hall in London.

She grew up with her three sisters helping to run their parents’ sheep farm and says she was helping to tend the flock just before coming to compete in Llangollen.

“My lifetime’s ambition is to become a professional opera singer and this fantastic prize will go towards helping me achieve that,” said a delighted Erin.

A close runner-up to Erin was 27-year-old Jessica Cale from Haverford West in Pembrokeshire.

Like Erin a singer since childhood, following a two-year course at the Royal College of Music in London Jessica is due to receive her Master’s Degree later this week and will then set the seal on her studies by joining the International Opera Studio at the college in September.

She said: “I’ve been singing all my life as my parents are both ministers of the Church in Wales which meant I grew up singing hymns and psalms.

“I sang in a church choir in Pembrokeshire and reached the final when I took part in a singing competition in Cardiff last year.

“This was my first major eisteddfod and I’ve really enjoyed being part of the Voice of the Future competition as everyone was so lovely.”

Mario Kreft said: “I believe a star was born this evening as Erin Rossington’s  performance was simply breath-taking and and highly commended by the judges.

“She is a spectacularly talented young lady who I am sure will go on to enjoy a glittering operatic career.

“Her victory was all the more commendable because she was up against a truly international field with competitors from at least six different countries vying for the title.

“Llangollen is known as the town where Wales meets the world but on this occasion it was where Wales beat the world.

“However, Jessica Cale also put in a stunning performance which will long be remembered.

“Our aim in supporting the competition in conjunction with Sir Bryn Terfel is to provide a springboard for brilliant young singers from around the world to achieve their dreams of establishing a career on the global stage.

“The competition chimes perfectly with our ethos at Pendine Park because the arts in general and music in particular provide the golden thread running through everything we do to enrich the lives of our residents and staff alike.

“I hope the recognition Erin and Jessica will deservedly receive after this competition will help them in their chosen careers and we see all three fulfil their ambitions of becoming major opera stars.

“The Pendine Trophy, which is solid Edwardian silver bearing a Chester hallmark, was been kindly donated by Chester jewellers Tony and Julie Kaye of Kaye’s Jewellers. It’s a stunning and beautiful trophy.”

According to the festival’s music director Dr Edward-Rhys Harry, winner Erin has a “unique talent.”

He said: “She has a beautiful timbre to her voice which also has a lovely sense of feeling. There is also an expressive quality to how she sings.

“However, the judges found choosing a winner very difficult as Jessica also has a fabulous voice.

“We are indebted to Mario and Gill Kreft, the Bryn Terfel Foundation and the Eisteddfod for providing us with this special award.”