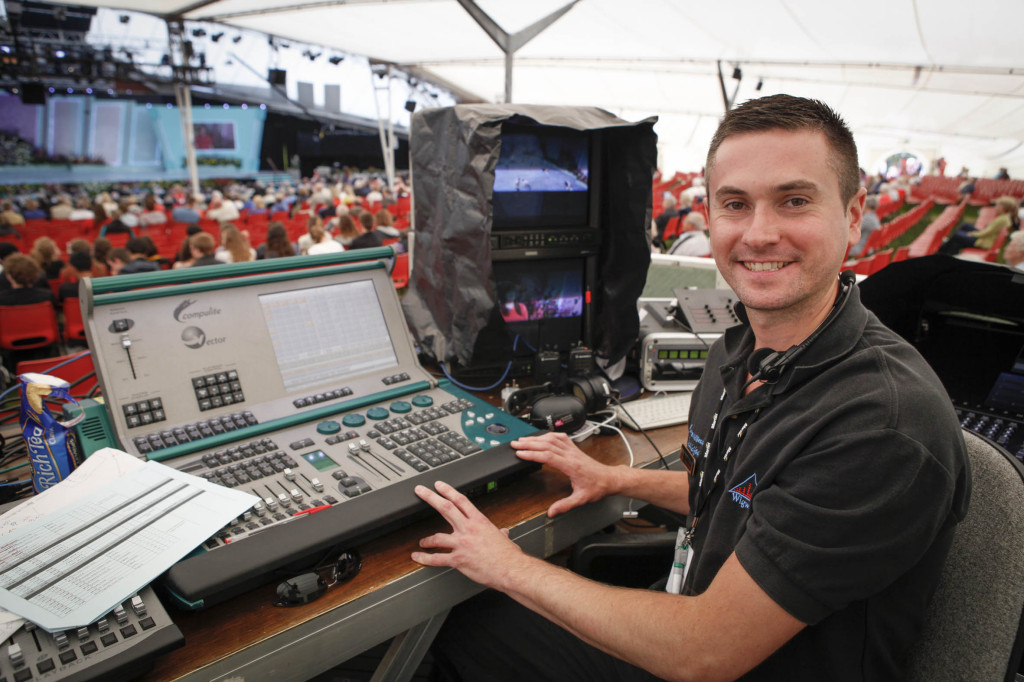 HELPING out behind the scenes at Llangollen International Musical Eisteddfod since he was just 11 years old has helped Mark Jones shed light on a host of big entertainment occasions including this year’s Glastonbury Festival.

Because the knowledge and experience 31-year-old Mark gained by working as a backstage volunteer at the festival has been invaluable when it came to carving out a career as a professional lighting designer.

Over the past eight years since obtaining an honours degree in production lighting from the Royal Central School of Speech and Drama in London he has helped light everything from rock concerts to corporate events in the UK and overseas.

Earlier this year he spent months on a tour of Australia and South America with US rock band The Misfits and just a few weeks ago he was among the technicians looking after the William’s Green Stage at Glastonbury, ensuring that bands such as 1975 and Metronomy were seen in the best possible light by thousands of festival goers.

It was while Mark, who is originally from Newbridge, near Cefn Mawr, was attending Ysgol Dinas Bran in Llangollen that he first began volunteering for the Eisteddfod.

He said: “I started off as an usher at the festival when I was 11 years old in 1994 and have been coming back every year since then.

“Every year I take a week off work to come along to Llangollen because I enjoy it so much. It’s a great atmosphere and you get to work with a great bunch of people.

“All the experience I’ve managed to get working backstage has also been a huge help to my career.”

Mark added: “This year at the eisteddfod so far has been really interesting because on Monday night I helped make sure the stage was properly set for Sweeney Todd: the Demon Barber of Fleet Street, with Bryn Terfel and Sian Cothi.

“Seeing that everything works smoothly behind the scenes for all the competitions during the week is also fantastic – but it can also be quite challenging because the various acts only get seven to 10 minutes on stage and there’s no rehearsal beforehand.

“Things were a little different down at Glastonbury a few weeks ago. I was in charge of the lighting set-up for quite a few bands over the four days of the festival.

“It was a lot of fun despite the rain we had for a couple of days.

“At the start of the year I was on tour with The American band The Misfits. In Australia we were mainly doing gigs around Brisbane and Sydney and then we moved on the South America for shows in Brazil and Argentina.

“It was all very different to Llangollen but I enjoy the eisteddfod so much I just can’t keep away. I’m going to keep coming back for as long as I can.”

Eisteddfod Chairman Gethin Davies, who was himself a schoolboy volunteer back in the early 1950s, said: “The volunteers are the lifeblood of the event and we are always grateful when more come forward.

“Mark’s experience and the way he has been inspired to make a fantastic career by the Eisteddfod is a wonderful example of how volunteering here can bring a lifetime of reward.”