As part of Volunteer Week, we are featuring a story each day from a volunteer, where they share their experiences of Llangollen International Eisteddfod.

My Visit to India

In 2017, I volunteered to look after a dancing group who were competing in the Eisteddfod, they were the Real Folk Cultural International Academy, a Bhangra dancing group from Ludhiana. 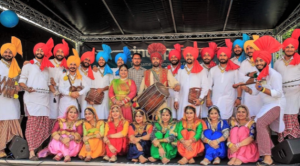 As a host, you meet and greet the group, you liaise with the office, transport department, TV crews if necessary, show them where they need to be when competing and escort them, and you generally look after them throughout their stay and offer them Welsh hospitality at its best.

What did I get for my week of hard work? I got to meet a group of enthusiastic dancers who were thrilled to be here, I learnt about a new culture and religion, I learnt a few new dance steps, but most of all I made some special friendships. I witnessed their excitement and anticipation and their pure exhilaration when they won a trophy, and at the end of the week I was physically and emotionally exhausted but went away with everlasting memories. 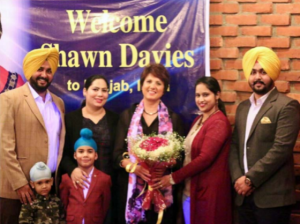 When they asked me to come and visit them in Ludhiana, I was delighted. I had already arranged to visit India, the Delhi triangle, Agra and Jaipur, so I extended my trip and flew up north to Chandigarh. I was met at the airport with flowers given to me by Gurjeet Cheema Singh, the President of the RFCIA and his good friend Satvir Singh. Lunch and sightseeing followed before travelling on to my hotel in Ludhiana. I was picked up later and taken to a pre‐arranged party given in my honour! Greeted by the competitors and guests, I was so overwhelmed by their kindness and hospitality and was presented with gifts and a lovely portrait drawn by Ravi. Delicious food was laid on and plenty of dancing took place, it was a fantastic evening.

The following day we travelled to Amritsar, to visit the Golden Temple (Sri Harmandir Sahib), the holiest Gurdwara and the most important pilgrimage site of Sikhism. I was privileged to be invited and we were joined by Gurjeet and Satvir’s wives Gurjinder and Rajwinder and their two gorgeous boys. This was a wonderful end to my very first visit to India.

Did you know it takes 800 volunteers to put on a successful Eisteddfod?

United in their dedication to the festival and all the good that it stands for, volunteers give up their time and talent during the year and many travel long distances to help during Eisteddfod week. Would you like to join them?