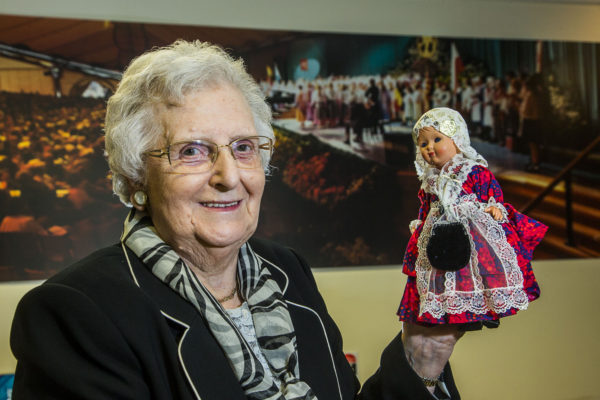 A veteran volunteer at an iconic festival is adding her voice to an appeal for new recruits to the army of unpaid helpers who have helped Llangollen International Musical Eisteddfod reach its 70th year.

Betty Roberts, from Johnstown, Wrexham, has been one of the vital cogs in the festival’s wheel for 50 years , meeting Diana, Princess of Wales and finding accommodation for thousands of competitors in that time.

She was once faced with the mission impossible of finding beds for 67 hungry Hungarians late one evening in North Wales back in the summer of 1980.

But thanks to Betty’s network of contacts and friends within hours every one of them had been found a place to stay and given a good meal.

The amazing piece of organisation, and many others like it, have all been part of the job for Betty, now a sprightly 84, who is celebrating 50 years as a very active member of the Eisteddfod’s Hospitality Committee, half of that time either as Secretary or Chairman.

As the 70th festival approaches in July Betty has been looking back over her incredible half century as an Eisteddfod volunteer and has added her support to an appeal for new volunteers.

Working closely with her fellow committee members it has been her responsibility to lay out the welcome mat and find accommodation for thousands of overseas competitors at the festival since 1966.

Most of the time things have played out as smoothly as one of the festival’s choral programmes. But there have been some challenging times too.

Betty, who has a son and a daughter and three grandsons aged 11 to 35, recalled the time the Hungarians arrived so unexpectedly on that evening 36 years ago.

She said: “In 1979 I was asked to take on the post of Secretary of the Hospitality Committee and I’ll always remember my first year in 1980.

“It was around 7pm on the Tuesday evening. I was in the reception area on the Eisteddfod field on my own when the telephone rang and it was a young man from Llangollen who was at Ruabon railway station and he said there were 67 Hungarians there and no coach for them.

“I had 67 beds to find at 7pm and in those days everyone stayed in private homes so I rang a couple just outside Wrexham to see if they could help. They rang me back to say they’d been out knocking on doors and, unbelievably, they had found 67 beds.

“The Hungarians, who we had fed while they were waiting, wept tears of joy as they couldn’t believe that people would open their doors at such short notice.”

Rhys Davies, Chairman of the Eisteddfod and a volunteer hiimself, said: “It’s people like Betty who make the event what it is and ensure that it carries on and is now in its 70th year.

“The volunteers do a fantastic job and are real ambassadors for Llangollen and for Wales and we do need more of them – and they get as much out of the job as they put in.

“That’s why people like Betty and others have been with us for so long and it’s what makes Llangollen unique among festivals.”

Betty’s long association with the Eisteddfod had its roots way back in 1953 when, the year before she was married to late husband Vernon, she met two members of an American singing group who were staying with her mother, Sally Oliver, in Cefn Mawr.

She said: “They were with the Purdue Glee Club from Indiana and I got to know them quite well.

“In fact, I kept up a regular correspondence with one of them, a lady named Bertha Fleming, until she died at the age of 92 over 20 years ago.

“It was meeting her at my mother’s and talking about the Eisteddfod that whetted my appetite for becoming a volunteer. That and a little encouragement from my friend Joyce Davies who was also from Cefn Mawr and Secretary of Hospitality.

“At first I was responsible for finding accommodation for the competitors in Johnstown, where I’ve lived for the past 60 years, but later I became Secretary myself for 13 years and then served as Chairman for another 12 years, finishing in 2004. I was also on the Eisteddfod board for 24 years from the 1980s onwards. 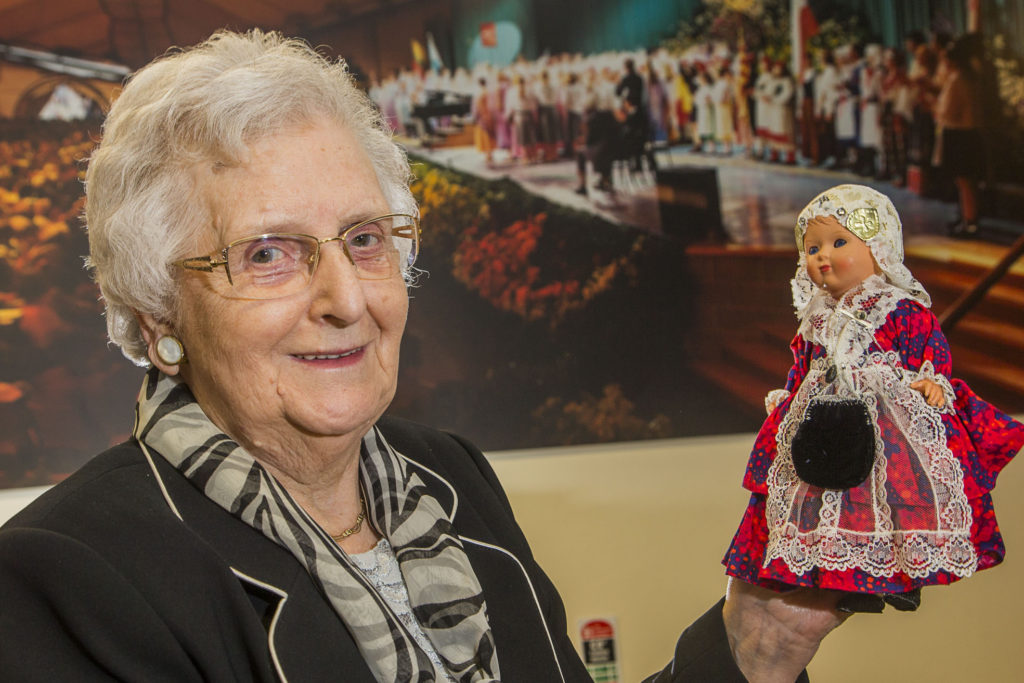 “Things have changed a lot over the years and when I first started we had to find beds for about 2,000 every year, all in private homes in an area stretching from Bala to Whittington in Shropshire.

“Now most stay in schools and hotels but we still have many who want to have the experience of staying with someone and we’re always keen to hear from people who would like to put people up.

“All of us on the committee are still kept very much on our toes and we’d be delighted to welcome new recruits – they won’t regret joining us.”

Over the years Betty has made lots of friends through her work in hospitality and she met the Prince and Princess of Wales when they visited the Eisteddfod in 1985.

Betty remembered: “Diana, who was a very nice girl and seemed to have done her homework about the Eisteddfod, said she hoped I’d be getting tickets for the evening performances as I had been working so hard.

“I recall telling her that we hardly ever got to see the performances because we were too busy, although we do now because we have a TV screen in our hospitality building on which we can watch them as we work.”

Now the festival’s official Hospitality Liaison Officer, Betty never misses an opportunity to promote the Eisteddfod to a wider audience and gives talks to groups across North Wales.

Meanwhile, Tickets sales for the concerts at this year’s Eisteddfod, which begins on Tuesday, July 5, are already going well, especially for the opening night when superstar Katherine Jenkins gets the programme off to a sensational start as she sings Bizet’s Carmen.