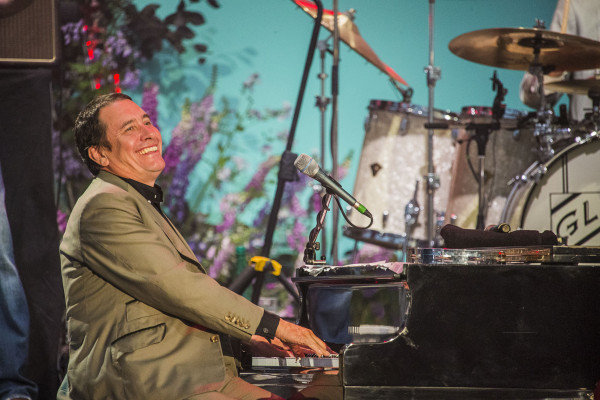 Boogie-woogie legend Jools Holland is returning to Llangollen International Musical Eisteddfod – to celebrate becoming a vice president of the iconic festival.
According to the former Squeeze pianist, band leader, author, TV and radio presenter he’s delighted to have been offered the honorary role at the “utterly brilliant event”.
Jools and his Rhythm & Blues Orchestra will be bringing down the curtain on the 70th Eisteddfod next summer with a foot stomping party on Sunday, July 10.

Tickets go on sale on Monday, September 14.
The concert, which will also feature guest vocalists Ruby Turner and Louise Marshall, is being sponsored by long time festival supporters, the Village Bakery.
Managing director Robin Jones said: “We are delighted to be sponsoring the Llangollen Eisteddfod again next, especially as it will be the 70th ever festival.
“We can’t wait to hear Jools and his band bringing the house down. It’s going to be an absolutely phenomenal night.”
Plans for the special 2016 event are already well advanced with classical singer Katherine Jenkins also booked for the opening concert on Tuesday, July 5.
The popular cross-over star will be performing a concert adaptation of Georges Bizet’s opera, Carmen, at the evening that’s being sponsored by care organisation Pendine Park.
London-born Jools progressed from playing pubs in the East End docks as a teenage greaser, to leading his Rhythm & Blues Orchestra and selling millions of records. 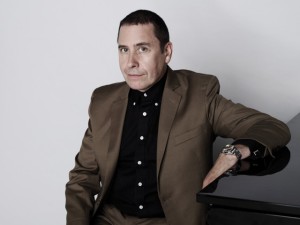 His BBC TWO music show ‘Later… with Jools Holland’ is just about to embark on its 47th series and has featured artists from all time periods, countries, and genres throughout the years.

He was awarded an OBE in 2003 for his services to the British music industry.
Jools vowed to return to Llangollen following his first appearance three years ago.
He said: “I was delighted and honoured to be asked to become a vice president of this remarkable festival.
“We had a wonderful time when we last performed in Llangollen which is such a beautiful little town. I loved the atmosphere, flowers, the appreciative audience and we met some fabulous people. It’s going to be an honour to appear.
“The festival was set up to promote peace and harmony among all nations after World War Two ended which I think is wonderful.
“The standard of young musicians and dancers who travel from all over the world to appear at Llangollen is testament to the organisers and volunteers who put in all the hard work to put the festival together.”
“We’re a big band but we’re unique because when people ask how many people are in the band, I don’t know! It’s about 22! You have all the singers, all the soloists in the band, Gilson Lavis on drums, so it’s a bit like a rock’n’roll rhythm section with horns bolted on top, like the Duke Ellington orchestra.
“I really do have the best job in the world, partly because of the people I’m playing with, but also because the band has a life of its own, where I can look out from the piano and see how much they’re enjoying themselves and how fantastically they’re playing. It’s like a train of excitement!”
The festival’s musical director, Eilir Owen Griffiths, is thrilled to have secured Jools Holland and his Rhythm & Blues Orchestra’s second appearance at Llangollen especially after signing up Katherine Jenkins for what will be her hat-trick appearance. 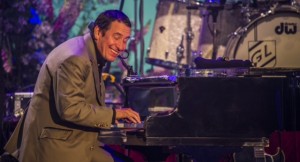 Jools Holland in concert at the Llangollen International Musical Eisteddfod 2013

He said: “Jools Holland is not only a wonderful keyboard and piano player and singer; he is a showman.
“His performance two years ago when he closed the week-long festival was simply amazing and so many people, regular supporters of the Eisteddfod, asked that we invite them back. And I’m delighted we have been able to do just that.
“The 2016 Llangollen International Eisteddfod is going to be a special celebration as it will be the 70th festival.
“It’s important we ensure we have the biggest names here performing in our evening concerts. The standard of the daytime competitions continues getting better and better and we want to ensure the evening concerts are as memorable as possible.
“We still have other big names to announce but in Jools Holland and Katherine Jenkins we couldn’t started with two bigger stars.
“We are going to have unforgettable first and last nights of wonderful music that will live long in the memory. It’s going to be very exciting and personally, I can’t wait.”

Jools Holland in concert at the Llangollen International Musical Eisteddfod 2013