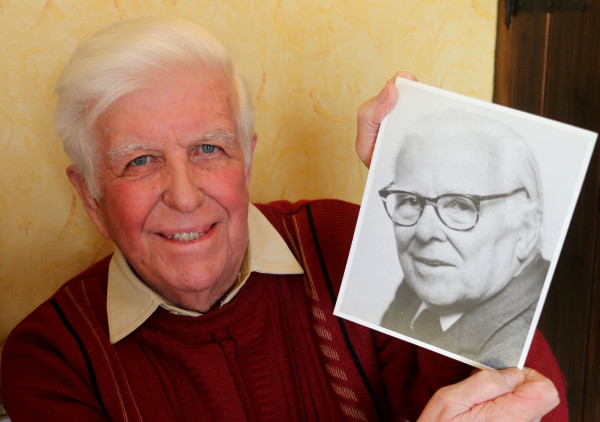 The son of the founding father of the iconic festival will be a guest of honour at the 70th Llangollen International Musical Eisteddfod this summer.

And Selwyn Tudor has recalled the occasion when his late father, Harold, gained his initial inspiration to create the event which has become a symbol of worldwide peace and understanding.

In the late 1940s renowned Welsh journalist Harold Tudor had a vision of creating a grand cultural gathering in Llangollen to help heal the scars left by World War Two.

And, according to his youngest son Selwyn, now 81 and living in Birmingham, that dream took shape one morning when he and his father were taking a Sunday morning cycle ride in the hills near their home in Coedpoeth.

He said: “We used to love going out riding on the country lanes and one Sunday in late 1945 or 1946 we were out there when we saw a young lad of about 11 or 12 – the same age as I was then – walking towards us over the crest of a hill singing at the top of his voice.

“He carried on straight past us and we watched him until he was out of sight.

“It was seeing this lad making himself so happy by singing that gave Dad the idea to start the Eisteddfod to create something that would foster the idea of peace amongst nations through music.”

Harold Tudor was originally from Tanyfron, near Coedpoeth, and after attending Grove Park School in Wrexham started work at the Wrexham Leader and later became a sub-editor on the Post and Echo newspapers in Liverpool.

During the Second World War he also became a member of the British Council, an organisation specialising in international educational and cultural opportunities.

This role brought him in contact with representatives of exiled foreign governments staying in Britain.

After coming up with the idea of starting an international event in the small Denbighshire tourist town of Llangollen, he won the crucial support for his brainchild from local teacher George Northing, the first chairman of the Eisteddfod, and from others including W S Gwynn Williams, a leading figure in Welsh music who lived in the town.

The scheme gathered momentum and the first Eisteddfod was staged on a field in the town in June 1947 with Harold becoming honorary director of publicity.

Over the years he became less involved with the festival after he took a job as a sub-editor with the Post and Mail in Birmingham and moved there with his family. After a full career he died at the age of 79 in 1986.

Selwyn Tudor, the second of Harold’s two sons, was born while the family was still living in Liverpool. His elder brother, Peter, who now lives in Staffordshire, is also to attend in July.

To escape the horrors of the Liverpool Blitz early in the Second World War Harold Tudor moved his family to his home area of Coedpoeth and Selwyn started secondary school at the former Grove Park Grammar in Wrexham.

His first job after leaving school was as a sales assistant at the old Lloyd Williams department store in the town for a short time before the family moved to Birmingham to follow Harold’s newspaper career.

After working for some time in retail, Selwyn eventually started his own business as a cabinet maker and antiques restorer, the role from which he retired at the age of 65.

He and his wife Ann, who live in the West Heath area of Birmingham, have two daughters, Susan and Debi and four granddaughters, aged from 15 to 25.

Selwyn said: “My dad was a very clever, kind and generous man.

“After the war ended he was searching for an idea to help promote international harmony and how to progress it, and he always said that the encounter with the young lad singing up in the hills above Llangollen is what really inspired him to start the Eisteddfod. 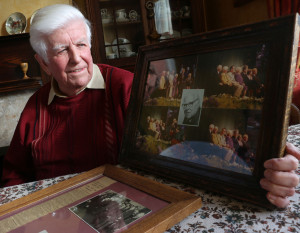 “I also recall that he used to take his motorcycle over the top of the hills through World’s End and down into Llangollen to speak to people about the arrangements for the first festivals.

“After a few years when we moved down to Birmingham he lost touch with the Eisteddfod but there’s no doubt that he was its founder, which is something I’ve always been very proud of.

“To some extent I think his involvement has been a little forgotten over the years but they did put up a plaque to his memory above Coedpoeth Library some years ago. There’s also a special commemorative plaque on his grave in the cemetery in Coedpoeth.”

Eisteddfod Chairman Rhys Davies said: “It will be wonderful to see Selwyn at the festival again this year – his father has left a wonderful and lasting legacy in this great event.

Selwyn added: “Unfortunately, I was too young to attend the first Eisteddfod in 1947 but I did start going regularly in 2004 and since then my wife and I have only missed going once, which was last year when Ann was ill.

“The first year I went to Llangollen we were invited up on stage to take part in a little celebration of the start of the Eisteddfod and I remember well Gethin Davies, who was festival chairman, tapping me on the shoulder and saying, ‘Your father was a wonderful man’.

“What my wife and I love about the Eisteddfod is the atmosphere as you walk through the field, meeting and having wonderful conversations with people from all over the world.

“We also love all the music and dancing and try to see as many things as we can during the course of the week.

“We’ve already arranged our accommodation and are very much looking forward to being at this year’s Eisteddfod, particularly at it’s the 70th one.

“I will also be remembering my father whom I can never forget for all he achieved.” 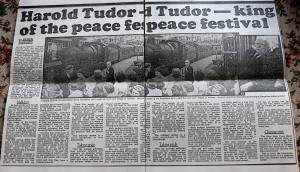 This year’s Eisteddfod begins on Tuesday, July 5, and the opening concert will see superstar Katherine Jenkins get the programme off to a sensational start as she sings Bizet’s Carmen.