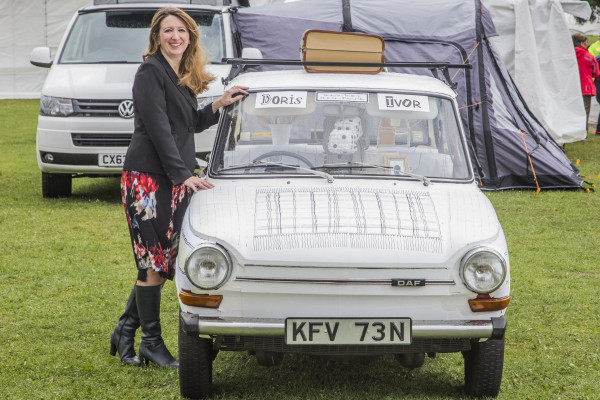 A CLASSIC car with a special paper facelift is being used as a vehicle to help people living with dementia.
The rare 1975 Daf 44 saloon owned by freelance artist Carol Hanson is on show at this week’s Llangollen International Musical Eisteddfod as part of a two-year project called Dementia and Imagination which aims to help people to cope with the condition in a fun, visual way.

The project involves academics at universities in Bangor, Manchester and Newcastle and in North Wales is assisted by Denbighshire County Council which has arranged for Dementia and Imagination to have a stand at the eisteddfod outside which the car has stood being admired by hundreds of fascinated visitors.
Carol, from Chester, said: “I’ve been working with the project since June and the aim is to see how the visual arts can help people with dementia to enjoy life a little more.
“We’ve been holding workshops at Rhyl Library and Ruthin Craft Centre for people with the condition at which they’ve been creating their own pieces of art in clay, felt and paint. They have also done jewellery making.
“Some lovely examples of the work have been in display on the stand at the eisteddfod.
“I then came up with the idea of creating a whole paper world around an imaginary couple called Doris and Ivor with the car at the centre of it.
“It’s a 40-year Daf which I’ve owned for a short while. It’s actually painted in red but I’ve put white paper stickers all over the bodywork and interior to make it look as if it’s made entirely of paper, which I chose because they’ve worked with quite a bit of paper in the workshops.
“I’ve also used paper to create accessories like a picnic basket, which comes complete with paper cakes, plates and cutlery and is used by Doris and Ivor on their days out in the car.
“Some of the fabric designs produced at the workshops will be the basis for a swimsuit for Doris and a Hawaiian shirt for Ivor.”
Carol added: “There’s been quite a bit of interest in the old car outside our stand at the eisteddfod which is exactly what we wanted.
“Our main aim is to show that dementia isn’t a life sentence and that people with it shouldn’t be written off.
“I think the car and the other paper items are fun ways of tackling what for some people has become a bit of a taboo subject.”
Following its appearance at the eisteddfod in Llangollen the Daf will go on to star at the Green Man Festival in the Brecon Beacons in August.
Its adventures with Doris and Ivor will eventually feature on the Dementia and Imagination website at http://dementiaandimagination.org.uk/ and Carol hopes it will also be a regular attraction at classic car events across Wales.
For more information about the Dementia and Imagination project, you can contract Sian Fitzgerald at Denbighshire County Council by emailing her at: sian.fitzgerald:@denbighshire.gov.uk