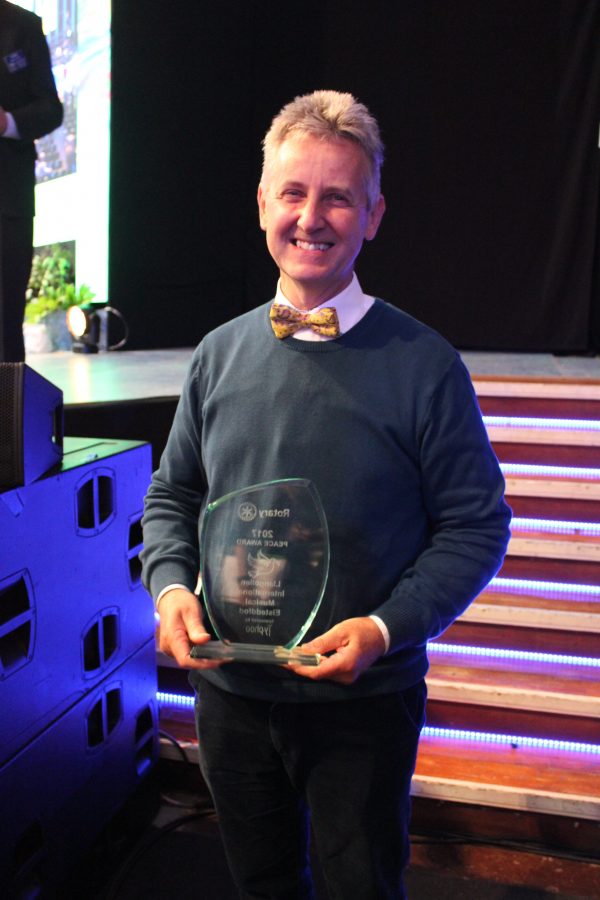 An organisation that speaks out to alleviate suffering and a weapons amnesty initiative have both won the Rotary International Peace Award.

British Ironworks was acknowledged for its Save a Life, Surrender Your Knife weapons amnesty project, which culminated in the creation of the National Monument Against Violence and Aggression – an Angel sculpture crafted from surrendered weapons from 43 police constabularies across the country. Also recognised at the presentation was Médecins Sans Frontières, for its policy of témoignage – speaking out to alleviate suffering and protect human life.

The two winners were nominated along with The Tim Parry Johnathan Ball Foundation for Peace and the Welsh Refugee Council.

TV presenter and British Red Cross ambassador, Konnie Huq, Richard Hazlehurst of the Bradford Peace Centre and humanitarian and President of the International Eisteddfod, Terry Waite CBE, decided to award both organisations with the prestigious accolade after tough deliberations.

Speaking of the decision, Terry Waite CBE, President of the International Eisteddfod, said: “It would be difficult to imagine more worthy candidates for this award. All four organisations nominated fully embody the International Eisteddfod’s ethos of peace, goodwill and understanding and the judges wish to pay tribute to them all. Selecting the winners was an extremely difficult decision for us to make.

“Médecins Sans Frontières policy of témoignage helps to break down barriers, alleviate suffering and spread the message of peace across the globe, while British Ironworks’ creative and striking initiative identified a real opportunity to address the knife crime epidemic in the UK.

“Both are relatively new initiatives and we hope that this accolade will provide them with a platform to further promote their great works and also encourage others to develop work in this field.”

Richard Hazlehurst said: “Judges always say that it was very difficult to decide because the standard was so high. Now I know why they say that, as it was certainly the case for this award – all four candidates are doing such different, but all equally valuable, work.

“There is a saying in my family which came out of a family tragedy nearly fifty years ago: ‘Why didn’t somebody do something?’ It was a question asked by someone who failed to be that somebody who did something. Both of our winners – Médecins Sans Frontières and British Ironworks, have seen a new and different need and ‘done something’ about it.”

TV presenter, Konnie Huq, added: “Médecins Sans Frontières policy of témoignage is a unique and much needed initiative. Speaking out where others will not as an impartial body can and will highlight many situations that need mediation and resolution. The impact of this work has huge scope and will no doubt contribute to the furtherance of peace globally. British Ironworks’ Knife Angel project is a simple yet effective initiative to lessen knife numbers on the streets.”

During adjudication the judges considered the public benefit of the project, the profile and longevity of each organisation and the impact of its work.

Speaking following the presentation of the award, which took place on the stage of the Royal International Pavilion, Paul McMaster, Chair of MSF UK, said: “I am delighted to accept this award on behalf of Medecins Sans Frontieres, and our many staff and volunteers all over the world.

“Our organisation was founded by doctors, but also by journalists – we provide life-saving care in war-zones and emergencies, but we also talk about what we see. Speaking out about the desperate situations in which our patients find themselves is a core part of what we do and we are very proud to be recognised for it.

“As with all of our work, it’s only with the support of the public that we are able to bear witness to suffering and so to push for change. So thank you to Rotary International and the International Eisteddfod for choosing us as joint-winners alongside British Ironworks – we hope this award will help raise the profile of what we do and help us to speak out even louder.”

Clive Knowles, Chairman of the British Ironworks Centre, added: “It is an incredible honour to be awarded the Rotary International Peace Award alongside an internationally renowned organisation such as Médecins Sans Frontières.

“The next stage of our project is to ensure that the monument fulfills its destiny by being placed on the 4th plinth in Trafalgar Square. We have launched a petition for this and urge as many people as possible to sign it so that can become a focal point in raising awareness of the scourge of knife crime on our streets.

“Only with the public’s help can the National Monument Against Violence and Aggression and its message reach those it was intended for. This award win will further raise the profile of our mission and we thank Rotary International and the International Eisteddfod for selecting us as joint winners.”

International Peace Award, the Llangollen Eisteddfod will from this year be the platform for the presentation of the award, to ensure the prize becomes an international and prestigious accolade.

Molly Youd, from Rotary International, said: “We would like to congratulate both Médecins Sans Frontières and British Ironworks on winning the peace award. Both organisations have made a significant impact nationally and internationally and embody the spirit of the award perfectly.”