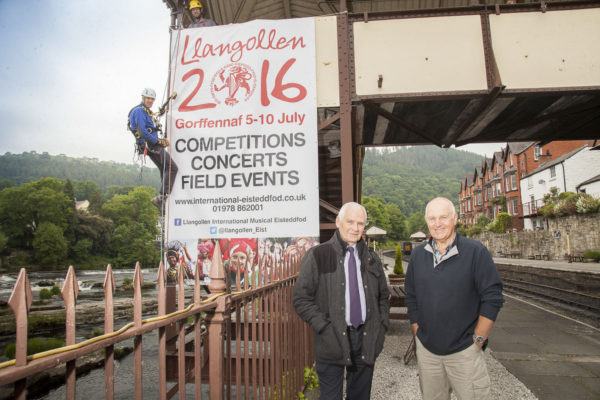 A team of high ropes experts from Llangollen have swung into action to help spread the word about the town’s iconic music festival.

The intrepid operators swayed out over the River Dee in the town centre to fix a four metre advertising banner to the Llangollen Railway Station bridge to get the message out about next month’s International Musical Eisteddfod.

Now thousands of travellers on the famous steam railway will see that the famous festival runs from Tuesday, July 5, to Sunday, July 10, what’s on and where to get tickets.

It’s also in clear view of the even greater numbers of visitors to the picturesque town who stroll across the famous Dee bridge, one of the Seven Wonders of Wales, and stop to admire the spectacular view upstream.

The idea came from Eisteddfod Marketing Chairman Ian Lebbon who said: “It’s a great example of different organisations in the town working together.

“We asked Llangollen Railway if we could put the banner up on their pedestrian bridge across the tracks and they agreed and we asked our neighbours at R3 Safety and Rescue who rent an office at the Eisteddfod site and they came up with the high ropes expertise to put it up safely. 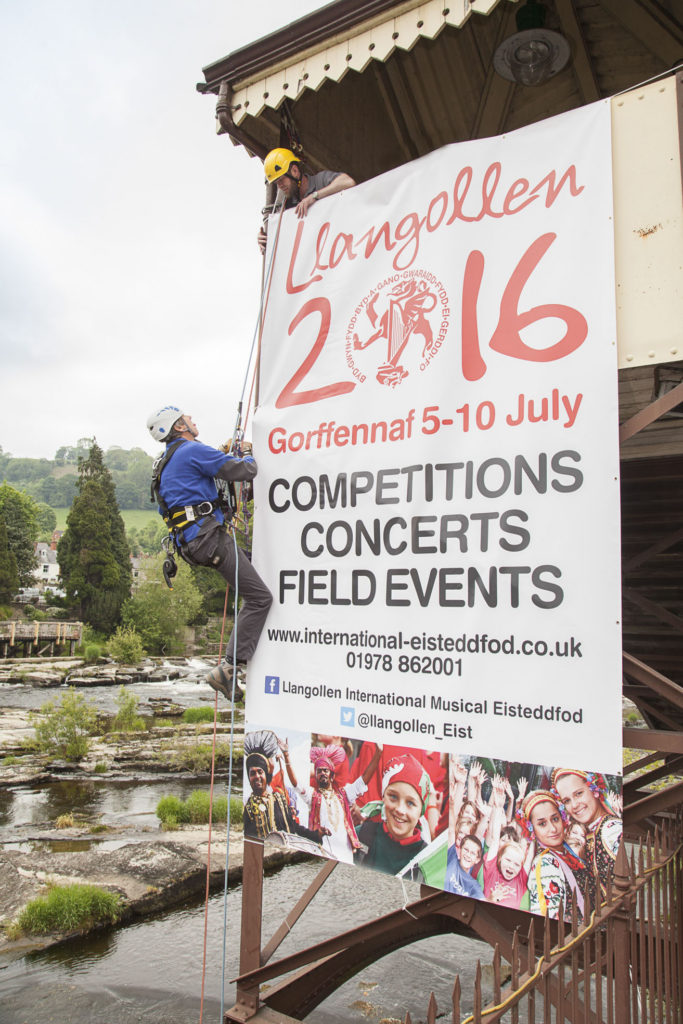 “The railway station is a prime location and they’ve also allowed us to put more banners up on the stations along the route at Berwyn, Glyndwyfrdwy, Carrog and Corwen.

“We’re very grateful to the railway and to R3 for their help – in a small town like this it’s important that we all work together.”

Llangollen Railway, a heritage line run by enthusiast, operates a mainly steam service the ten miles to Corwen and back with over 1,000 passengers a week during busy periods.
Kevin Gooding, the Railway’s General Manager, said: “We will have thousands of visitors passing through the station so it is in an ideal spot.
“We benefit from the Eisteddfod because the TV often bring artists and performers down here to film them and so we get our share of publicity from that.
“We had Prunella Scales and Timothy West here last year for a cream tea because they were filming on the canal and the next thing we were being inundated with requests from round the country for cream teas.”
The man hanging out over the waters of the fast-flowing Dee was R3 Safety and Rescue Managing Director Paul O’Sullivan watched by Operations Director Chris Heath.
He said: “We’re a safety and rescue training provider and we work across the UK and Ian asked if we’d help out with this and we’re delighted to do so.


“We teach all the emergency services a range of skills including mountain and water rescue and we use the River Dee and even the Royal International Pavilion which is ideal for our high ropes work so we were happy to get involved.”