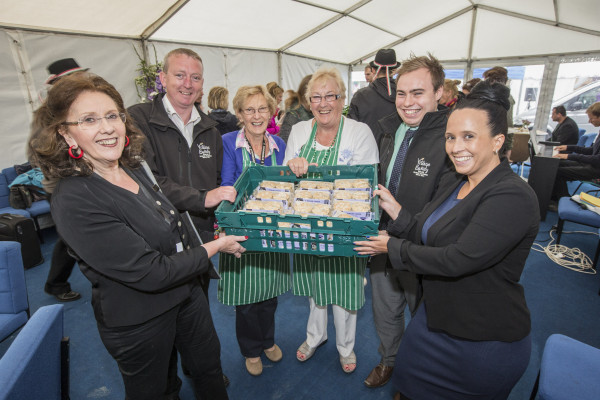 HUNGRY competitors at the Llangollen International Musical Eisteddfod have had the chance to sample Welsh cakes made by the royal hands.
On Tuesday Prince Charles and the Duchess of Cornwall visited the headquarters of the Village Bakery on Wrexham Industrial Estate and during a tour of the production area donned white coats and hats to help flip a batch of the traditional Welsh delicacy on a hot griddle.
The following day a team from the award-winning bakery delivered a complimentary consignment of over 200 packets of the cakes to the Eisteddfod’s hospitality department – including the ones which the royal couple helped to prepare.
And competitors from across the globe who had never sampled them before were soon snapping them up.

Village Bakery marketing assistant, Kieran Windsor, said: “Our chairman, Alan Jones, insisted that we make a donation of Welsh cakes to such a worthy cause at the Llangollen Eisteddfod, which we have been pleased to support for a number of years.
“As the Prince of Wales and the Duchess of Cornwall also visited the Eisteddfod soon after they came to the Village Bakery we thought it was most appropriate that the batch of Welsh cakes we delivered there should include some of those which the royal couple helped to produce.”
Julie Sanders, chairman of the Eisteddfod’s Finance Committee, said: “We appreciate the donation of the Welsh cakes tremendously because during the course of the week our team of 100 hospitality volunteers feed hundreds of hungry competitors from across the world and some of them have very little money to spare.”
One of the first to sample the cakes when they went out on display in hospitality was 31-year-old Katalin Fabry, a member of the Gesualdo Choir from Hungary who were competing later in the week.
Katalin, who is from Budapest, the country’s capital, said: “It was very nice to taste the cakes especially as they were made by Prince Charles and the Duchess.
“I know they are typically Welsh so it was nice to have something connected with Llangollen where we having such a fantastic time.”