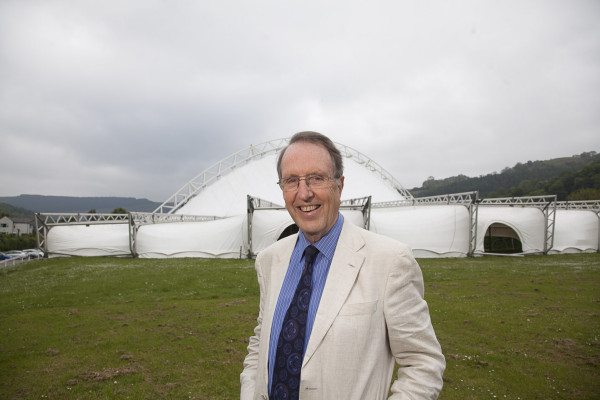 The only two-time chairman of the Llangollen International Musical Eisteddfod steps down this week, ending a 64-year association with the great event.
Gethin Davies began as a 12-year-old programme seller in 1951 and has also been an usher and the festival secretary as well as chairman from 1992 to 2003 and from 2013 to this year.

His wife, Eulanwy, has also served as Musical Director of the Eisteddfod which began back in 1947 and which will celebrate its 70th anniversary in 2017.
Retired solicitor Gethin, 76, who overcame cancer last year, said: “My three-year term ends this year and I’m not seeking re-election and I’m moving out of the way after 45 years on the board.”
He was born in Porthcawl, in South Wales, and moved to Llangollen when his father became head of the secondary modern school in the town and he said: “I heard kids talking about selling programmes for a commission.
“I got tuppence for each one I soldat two shillings each and I ended up with 25 shillings – £1.25 in today’s money – but it was a special bumper edition of the programme because it was The Festival of Britain that year and in 1952 it went back to a smaller size for one shilling and the commission was just a penny and I didn’t make so much.”
He moved onto the job of usher, not so lucrative but with the attraction of being able to attend all the concerts and he recalls 1953 with the Obernkirchen girls singing The Happy Wanderer.
In later years he saw artists like the great violinist Yehudi Menuhin, the thunderous Bulgarian bass Boris Christov and an artist billed as ‘A Mexican Tenor’ who turned out to be a young Placido Domingo.
Gethin, who studied law at Aberystwyth, where he met Eulanwy, later became a founder partner in successful solicitors firm GHP Legal in Wrexham, major sponsors of the Eisteddfod.
Until 1992 when the Queen opened the new Royal International Pavilion, the event was held in a huge marquee but the Eisteddfod, set up originally as a means of promoting peace and harmony internationally also displayed a shrewd business sense.
Gethin said: “In 1958 they bought the fields where the event is held today for £12,000 which was a large sum but it’s turned out to be a very good piece of business.
“They leased part of it to the old Denbighshire County Council with the proviso it be available for the Eisteddfod and they later worked out a deal with Clwyd County Council thanks to the Chief Executive of the Council, Mervyn Phillips, which has also proved crucial.
“We raised £500,000 and the Council applied for an got £3 million of European money which paid for the Royal International Pavilion.
“The construction was running rather slowly but when the builders found out that the Queen was coming to open it they really got a move on.
“The week before the Fron Choir tested the acoustics and they were awful.
“The compere, Robin Jones, actually had a gun on stage and, after making a joke of it with the audience, he fired it to test the reverberation time and they put various baffles in and the sound quality has become excellent over the years.
“It’s a wonderful auditorium for competitions and concerts and it still retains that feeling that you’re virtually in a canvas marquee which is unique to the Eisteddfod.”
Gethin’s first term as Chairman began in 1992 and he was in post for Luicano Pavarotti’s return in 1995 and through to 2003 and then he stepped up again in 2013 but his involvement hasn’t been confined to the backrooms as one of the army of volunteers.
He has competed as well, first as a member of the renowned Fron Choir for 13 years, finishing second twice but winning many other events including the National Eisteddfod.
More recently he has sung with mixed choir Cor Rhuthun, also National winners but never first at Llangollen and he said: “It would be great to win here, I’d dearly love that. I’d swap all the other wins for one at Llangollen.
“The competition for the Choir of the World is the highlight of the week for me nd I really enjoy it, I wouldn’t miss it for the world.
“But the Eisteddfod remains unique, it’s the grand-daddy of them all, all those events like Glastonbury – and it’s down to the volunteers because our permanent staff is only small.
“It is that army who give their time and often hardly see anything of the event itself, they make it what it is and make it so special.”
In retirement Gethin plans to take a break from that behind the scenes labour but he will still be a fixture at the event – he can see the field from the picture window at his home on the hill above.”