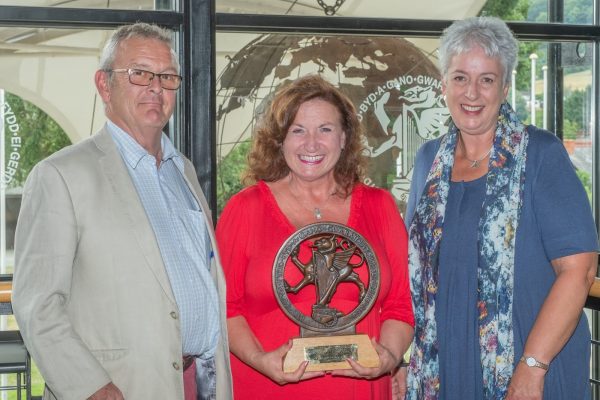 After leaving the festival last month without realising their victory, the winning choir now has their trophy at last. The joint win with the British Columbia Girls’ Choir from Canada, both with scores of 89.7 meant that they also, were to receive the highly regarded Owen Davies prize.

Travelling across the border to the picturesque town of Llangollen, Jo, along with her husband Phil, arrived back exactly 10 years to the date the choir was founded by the former professional opera singer to mark a victory as the first English choir to claim the title.

The Children’s Choir of the World is a prestigious award, sponsored by the chairman, Dr Rhys Davies and his wife Ann in memory of their son Owen who sadly passed away in 2016 at the age of just 33. Owen was a true internationalist having worked as a teacher from China to Chile and Argentina to Spain. It was appropriate that the first choir to whom Millie, Owen’s sister, presented the award came from Shanghai, the city in which he had worked.

Jo Williamson, Choir Director of Cantabile said: “As the first English choir to have been awarded this prestigious prize, I was speechless when I heard how well we had done and I couldn’t be prouder of the girls.

“After winning the Children’s Folk Song Choirs on the Wednesday of the Eisteddfod, we competed in the Children’s Choir of the World the day after. We didn’t think we had achieved strong enough scores to be crowned winners and decided to travel home.

“It was on our way back to Hereford, I received a call from the festival to say we were actually joint winners with the British Columbia Girls’ Choir from Canada but at this point we were travelling home in separate vehicles.

“We were ecstatic and shocked but very proud of this trophy especially as it’s in memory of Dr and Mrs Davies son, Owen who passed away at such a young age. We can’t thank the Eisteddfod enough for this unforgettable opportunity.”

Chairman of the Llangollen International Musical Eisteddfod and sponsor of the Children’s Choir of the World, Dr Rhys Davies said: “We’re incredibly pleased that Cantabile Girls Choir has received this rightful award along with the British Columbia Girls’ Choir.

“We were delighted to present the trophy on this occasion to Jo Williamson who heads up the group which consists of 22 pupils of Hereford Cathedral School, even if it was slightly belated.”

Cantabile Girls Choir have made regular returns to the Eisteddfod and previously won the Children’s Folk Choir competition in 2015. Since then, they have been winners of BBC Songs of Praise and were Barnardo’s School Choir of the Year in 2017.