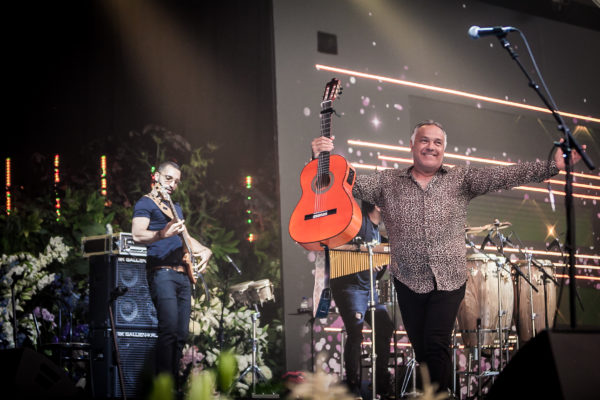 Festival-goers put on their dancing shoes for an evening of vibrant rumba, flamenco and salsa that brought the ultimate Friday night party vibe to the Llangollen Eisteddfod.

Gipsy Kings thrilled the crowds of Llangollen with an unforgettable night, opening the show with an up-tempo rendition of ‘A tu Vera’, before launching straight into ‘Alegria’.

Andre Reyes, joined by his group, barely drew breath for the following 90 minutes. This was their first appearance at the International Eisteddfod and they raised the roof of the Pavilion with a sensational concert set, including iconic anthems ‘Bamboleo’, ‘Volare’ and ‘Djobi, Djoba’.

Gipsy Kings provided a show-stopping finale, bringing the energetic show to a close and the audience to their feet with a passionate performance of fans favourite ‘Hotel California’.

This weekend includes a performance-packed family funday on Saturday, celebrating community and togetherness through music and dance. Sunday is Llanfest 2019 the festival’s finale party, with multiple stages hosting live bands throughout the afternoon and celebrated British rock bands, The Fratellis and The Coral duo headlining on the main stage in the evening.